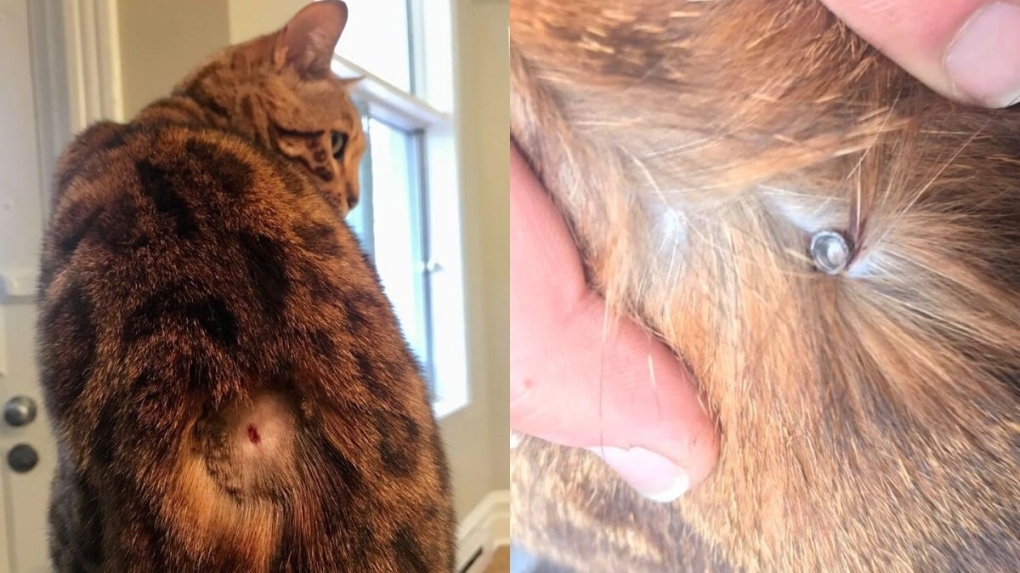 A group in the Plateau is organizing after a multiple local cats have been shot with a pellet gun in the area. SOURCE Facebook

MONTREAL -- A group of neighbours in a certain part of Montreal's Plateau area have been trying to investigate who’s shooting local cats with a pellet gun.

Now police, SPCA investigators and the borough have gotten involved after the citizens proved that several cats have come home with small lead bullets embedded in their skin.

The pellet shootings have been happening since at least mid-May, but it’s taken a while for the victims’ owners to find each other.

“Mine came back with a 5 mm lead totally stuck in his back,” wrote one man, named Thierry, on his Facebook page this week.

He was trying to warn others in the area—roughly near the intersection of Rachel and Christophe-Colomb—that a “shooter is targeting” local cats.

Thierry, who didn’t want his last name to be published, told CTV that he’s found four cat owners who had the same experience.

His own cat was away for three hours one morning and came back with the pellet.

“I realized it by petting him,” said Thierry.

He said it bothered him in a few ways to think of someone shooting pellet guns at random near his home.

“The situation is certainly disturbing for our cats,” he said, but that on top of that, “the important thing for me is to have safe alleyways for everyone, families, children and animals, who are particularly present during COVID.”

He told CTV that he made his first formal complaint on June 1. He had already made three 911 calls and “insisted heavily” that police look into it. SPVM did eventually send a car with two officers and they wrote a report.

Another victim Thierry had found over Facebook added a statement. That person said their cats had been shot about two weeks earlier but hadn’t been able to file a complaint at the time, he said.

Thierry said police told the two they’d be “more effective than the police through social media and making flyers,” so they did exactly that, distributing flyers in early June and posting on Facebook.

That led to new involvement from the SPCA and the borough mayor of the Plateau.

Last Friday, police went door to door with flyers, he said, and did some bike patrolling in the alleys.

The SPVM and SPCA didn’t respond to requests for comment. People with information are asked to call Info-Crime Montreal at 514-393-1133.