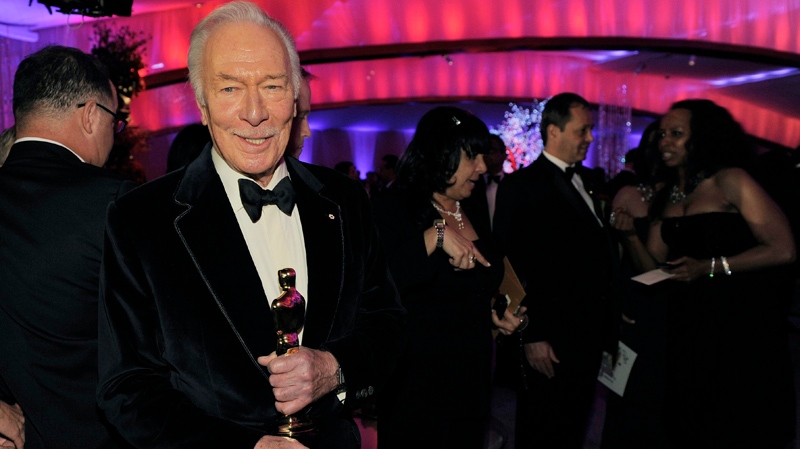 Christopher Plummer with the Oscar for best supporting actor for his work in "Beginners" at the Governors Ball following the 84th Academy Awards on Sunday, Feb. 26, 2012, in the Hollywood section of Los Angeles. (AP Photo/Chris Pizzello)

MONTREAL - Christopher Plummer, who grew up in Sennneville, attended Montreal High School and established his glorious acting career at an outdoor theatre on Mount Royal, has finally been rewarded.

The 82-year old actor was awarded the Oscar for best supporting actor for his poignant turn as an elderly widower who embraces his homosexuality in "Beginners." Plummer is now the oldest-ever acting prize winner at the Oscars.

Arthur Christopher Orme Plummer was born in Toronto on Friday, Dec. 13, 1929. His father Arthur was secretary to the dean of science at McGill University.

His mother Mary was the grandaughter of Sir John Joseph Caldwell Abbott, the first Canadian-born prime minister (1891-92) and onetime mayor of Montreal.

Within a year his parents divorced and Plummer moved with his mother to an 18-acre estate in Senneville, a suburb just west of downtown.

Plummer dabbled as lighting designer at Montreal High and at 15 had his first role in Pride and Prejudice. He then went on to act on Mount Royal at a playhouse that stood in the park in the mid-1950s.

Producer-director Rosanna Seaborn, who lived next door in Senneville, became his mentor and his famous career took off soon after.

Plummer acted alongside William Shatner and many others in Montreal and did many radio dramas. He worked in French drama as well.

Plummer has continued to appear in many French plays in Montreal at the Theatre du Nouveau Monde over the years.

He has also been known as an admirer of Montreal's architecture and has had a hobby of photographing Montreal's downtown greystones and historic mansions, which he considers among the world's best.

In his speech Sunday, Plummer thanked his wife Elaine Taylor, whom he married at Montreal's Ritz Carlton Hotel in 1970.

The previous oldest Oscar acting winner was Jessica Tandy who was 80 when she landed a trophy for "Driving Miss Daisy." Backstage at Sunday's show, Plummer reportedly brushed aside the "oldest winner" distinction, noting that Charlie Chaplin won an Oscar when he was almost 83 (for best score).

Movie-goers likely know him best as Capt. Georg Von Trapp in 1965's "The Sound of Music," but Plummer had mixed feelings about that sugary smash. The role is but one of some 200 astoundingly diverse credits he has amassed both on the big and small screen.

In the '70s, his films included "The Return of the Pink Panther" and "The Man Who Would Be King," while the '80s included a role in the TV miniseries "The Thorn Birds" and the '90s saw him play a Klingon in "Star Trek VI: The Undiscovered Country."

Amid the steady screen work, Plummer continued to work onstage, frequently returning to Ontario's Stratford Shakespeare Festival to take on some of theatre's greatest roles including Hamlet, Lear and Prospero.

Many critics thought Oscar would come calling after Plummer's eerie rendering of newsman Mike Wallace in 1999's "The Insider," but he was overlooked.

In the past decade, the indefatigable actor seemed to take on more film roles than ever, appearing in "Syriana," "The Imaginarium of Doctor Parnassus" and doing voicework as explorer Charles Muntz in the Pixar hit "Up."

Finally, two years ago, Plummer was rewarded with his first Academy Award nomination for playing Russian writer Leo Tolstoy in "The Last Station."

At the time, he affably noted that Chaplin had to wait until he was in his 80s to receive an Oscar.

Earlier in Sunday's broadcast, host Billy Crystal joked about Plummer's advanced age cracking: "He may be walking up on stage tonight. Because apparently he wanders off."

Plummer has called "Beginners" one of his most enjoyable movie roles yet.

Based on Mills' own experience with his father, the film shows an impish, playful side of the actor.

He plays Hal, a retired museum director who comes out of the closet after the death of his wife of 45 years. As his somewhat baffled son (McGregor) looks on, Hal embraces his newfound social sphere with child-like wonder, taking a much-younger lover (Goran Visnjic of "ER" fame) and discovering the joys of house music while sporting a jaunty bandanna. His fresh start is abruptly upended when he learns he has cancer.

During his awards season run, Plummer has repeatedly praised Mills and says he's long admired the work of McGregor.

The role has already earned him a Golden Globe, a Screen Actors Guild Award and a BAFTA (Britain's version of the Oscars) and he was considered a virtual lock for the Oscar.

The veteran actor has also been burning up the screen in another Oscar contender: "The Girl With the Dragon Tattoo." He's due to return to Stratford this summer to debut a one-man show entitled "A Word or Two."