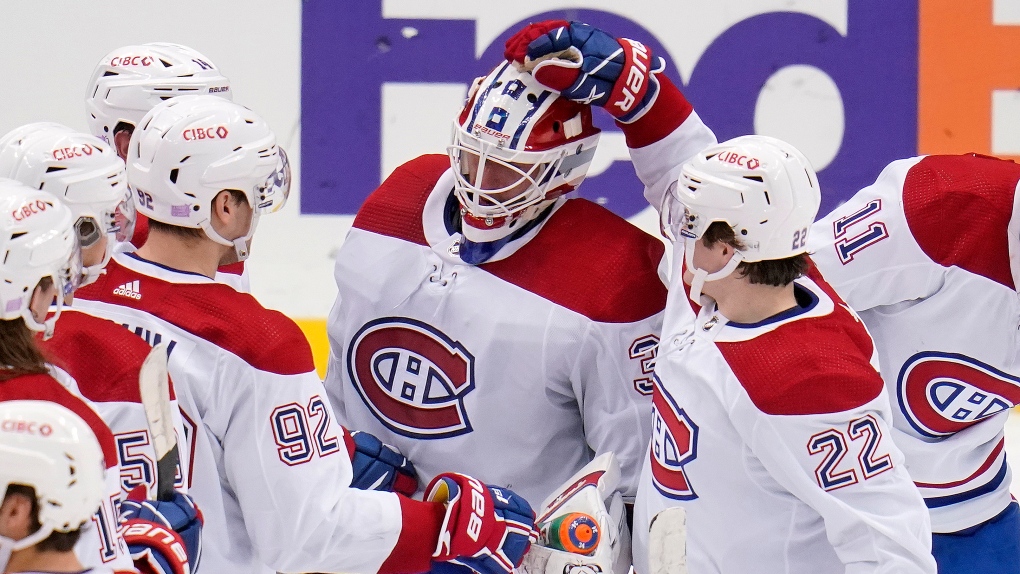 The Montreal Canadiens scored five third-period goals, and the most important one came shortly after Pittsburgh tied the game.

Christian Dvorak scored the first of those five, helping the Canadiens end a lengthy road drought by beating the Penguins 6-3 on Saturday night.

Evan Rodrigues tied it at 1 with his power-play goal at 2:33 of the third period, but Dvorak scored 32 seconds later to help keep Montreal in front for good during a wild third period in which the teams combined for five goals in the final 2:37.

"You can't always answer with scoring a goal back," Canadiens coach Dominique Ducharme said. "But obviously, doing that and getting rewarded with a goal is huge. That's a good way to react."

Artturi Lehkonen also added to Montreal's third-period fluffy, as well as Josh Anderson's two empty-netters and an empty-netter from Tyler Toffoli. Jonathan Drouin scored his third goal in the second period for Montreal, which snapped a seven-game road slide and a two-game losing streak, and Jake Allen stopped a season-high 47 shots.

"Obviously, we've been down in the dumps a little bit as a group, and not playing our best hockey," Allen said. "I just thought it was an important game to play well with a lot of effort, and most importantly, get the win."

Casey DeSmith stopped 27 shots in just his fourth start of the season. He hadn't played since Nov. 13 at Ottawa.

"It was unfortunate that (Montreal) scored right after our power-play goal to tie it up," Penguins coach Mike Sullivan said. "You'd like to think you can build on that and create some momentum. To give up that one as quickly as we did was a little bit discouraging."

Montreal's only other road victory this season came Oct. 28 at San Jose. The Canadiens are 2-9-1 on the road.

Drouin opened the scoring with 4 1/2 minutes left in the second period. The puck skipped over Kris Letang's stick at the offensive blue line and Drouin took it the other way for a breakaway, beating DeSmith with a backhander between the legs.

Rodrigues tied the game and Jake Guentzel continued a career-best nine-game point streak with a secondary assist on the goal; it's also the NHL's longest active point streak.

But Dvorak beat DeSmith from the top of the crease and Lehkonen gave the Canadiens a 3-1 lead at 6:16 of the third period. Lehkonen whacked a loose rebound past DeSmith for his third goal in four games.

Carter scored for Pittsburgh with about three minutes left, but Anderson added his first of the Canadiens' three empty-net goals with less than two minutes to go.

"It was just a matter of getting some positive vibes going back home," Allen said. "I thought it was a crucial game for us."

It was the second game of a back-to-back for both teams. The Canadiens lost 4-1 at Buffalo, while Pittsburgh shut out the New York Islanders 1-0 in New York. Pittsburgh only allowed two goals during its five-game win streak.

Montreal, which reached the Stanley Cup Final last season, is 6-15-2 after 23 games.

Sullivan didn't indicate whether Rust would join the team on its upcoming four-game road trip.

Rust, who has two goals and nine points in 12 games, missed seven games earlier this season with a lower-body injury. He was third on the team last season with 22 goals.

The Canadiens announced during the game that assistant general manager Scott Mellanby resigned. He was promoted to that role during the summer of 2014, after having initially joined the Canadiens as director of player personnel in May 2012. The team said in a statement it would "not comment further."