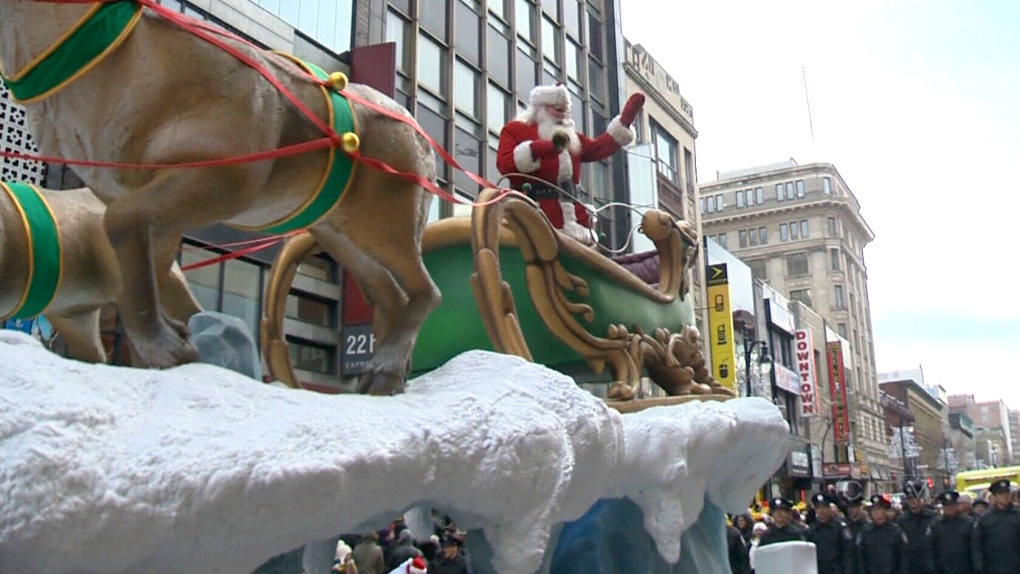 MONTREAL -- The annual Santa Claus parade in downtown Montreal has been cancelled, the Canadian Press has learned, and organizers in Sherbrooke and Quebec are still deciding whether or not to follow suit.

The Societe de developpement commercial Montreal centre-ville said its working on initiatives to replace the event. They “will be announced this fall and will take into account the current context of the pandemic,” the organization said.

According to the organization, the parade drew around 400,000 spectators last year and was seen by more than 700,000 viewers on television.

Montrealers won’t be able to watch the Canadian Pacific (CP) Holiday Train pass through the West Island this year either, as the railway company has announced it will instead host a virtual concert.

The light-up train that zigzags around Canada and the northern United States will trudge on again “to spread Christmas cheer as soon as it is safe to do so,” CP President and CEO Keith Creel said in a press release.

One minute before midnight

In Sherbrooke, parade organizers are in a “process of reflection” to determine whether they will hold the event or not. They pointed out the uncertainty surrounding whether or not Santa Claus will be able to travel given the closure of the borders. A decision will be taken at the beginning of next week at the latest, they said.

If the parade does take place, it would not be in its “traditional” format, said Sylvie Luce Bergeron, president of the Fééries hivernales de Sherbrooke. “Last year we attracted between 32,000 and 35,000 people,” she said. “It's called a nasty gathering, that.”

“Why not a reverse parade,” Bergeron said. In that scenario, spectators would parade by car to look at stationed floats.

The city is letting organizers decide on the fate of the parade, but is being “cautious,” she noted. The recent cancellation of Granby’s parade is also putting “pressure” on them.

The organizers are putting their energy into putting together the Sherbrooke Carnival – an activity that they believe would be more easily adapted to the pandemic. “And it’s in February or March,” Bergeron said. “We have time. Maybe we will put all our marbles in the same event by creating a small parade within the carnival.”

It’s not yet clear what form Quebec City’s parade will take or whether it will be cancelled altogether. Called La Parade des jouets, it's usually held in early November.

“We are working hard to make sure there is one," said Mireille Tremblay, producer at Les Ateliers Balthazar. “I can tell you that we will make sure that the children can see Santa Claus. That's what counts.”

Several scenarios are being considered, but much like Sherbrooke, it wouldn't “the classic parade that we know,” she said, while specifying that “we’re definitely not aligning ourselves towards a virtual event.”

Organizers say they are working with public health to ensure the event could be held while respecting public health guidelines. However, they don’t know if Quebec City entering the red zone on the province’s regional alert map will change things.

Usually about 90,000 people set up camp along the three-kilometre route to watch the parade. It generally has 12 floats and about 60 paintings. Around 400 extras are in costume, including dance troupes, characters, professional actors and singers.

This report by The Canadian Press was first published Sept. 29, 2020.