MONTREAL -- The humpback whale that has been wandering around the St. Lawrence River near Montreal’s Old Port for the past week has died.

A video posted to Facebook by maritime pilot Simon Lebrun on Tuesday depicts a mammal’s seemingly lifeless body floating down the river near l’Ile Beauregard, past Varennes – about 40 kilometres northeast of where it was first spotted by Montrealers.

"We know the area quite well, so pretty early we saw there was something dark on the horizon," said Lebrun, who has worked as a maritime pilot for 13 years. "When you see something such as a whale, obviously it stands out, it's not supposed to be in these parts."

Lebrun actually first spotted the whale on the morning it arrived, he said.

"And now I see it dead and beached," he continued. "I can see the population had really attached itself to the whale, I was kind of surprised by the whole thing. In the end we all hoped she would find her way back." 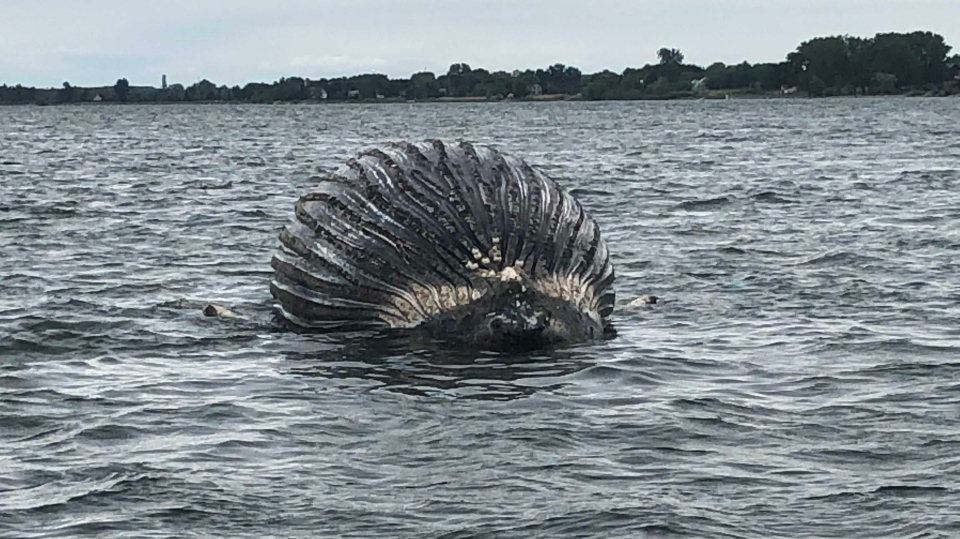 Officials from the Groupe de recherche et d’education sur le mammiferes marins (GREMM) confirmed the carcass is indeed that of a whale, but have not yet confirmed it to be the one Montrealers have come to know and love.

"We're still trying to confirm it is the same whale but there is high probability it is the same," said Marie-Ève Muller from the GREMM.

A team will attempt to recover the carcass from the water on Tuesday.

“It’s quite a logistical challenge, to tow a 9.5-metre whale weighing about 20 to 30 tons to the shore," Muller said. "A lot of challenges, a lot of questions, and we’re hoping for answers.”

Once the whale's carcass is recovered, a necropsy will be conducted in order to try to determine its cause of death, whether it was able to find food so far from its home in Tadoussac, as well as any other information that may shed light on its behaviour and presence in Montreal, Muller said. A lot of things can be checked through a necropsy, including its genetics to see if any of its relatives are known to the GREMM.

Many have asked why officials couldn't safely lead the whale back towards its home. Muller said the GREMM doesn't interfere when whales decide to venture out on their own without being forced.

"We usually let nature do its test," she said. "Some techniques have been tried elsewhere in the world without significant results, or sometimes worse results – the whale would be so disoriented that it would beach itself, so we were really trying to let the whale do what was good for it at its own pace.”

Muller said the upside of the whale's visit, despite its death, is that it seemed to make Montrealers reflect on pollution and what role they play in terms of keeping habitats safe for animals.

"For a lot of people who wrote to us, it was the first time they realized that the St. Lawrence is also a habitat for whales," she said. "If that raises awareness to people about what they throw in the water, what they put in the sewage system, what we get by shipping... Maybe this was a first step (for) people to be aware about how we can best share the St. Lawrence with the whales."

When the whale was first spotted in Montreal, officials said it showed no signs of distress and was probably searching for food. They estimated the whale was between two and three years old, and said it was the first time they confirmed a whale the size of a humpback in the Montreal area, although minke whales and belugas have been spotted in the past.