MONTREAL -- The champ has arrived home.

Laurent Duvernay-Tardif, the Quebec-native-turned-McGill-medicine-graduate-turned-Super -Bowl-champion was back in Montreal on Sunday, saying his journey was "unbelievable" and "crazy."

A week to the day after winning the NFL Championship with the Kansas City Chiefs the lineman thanked the fans in his home province, saying they have always been a source of positivity in his life.

Duvernay-Tardif was in a playful mood. When one reporter asked what it felt like playing in the Super Bowl with millions of people watching after playing to just 1,000 people while a member of the McGill Redmen, he deadpanned those crowds were actually just 500 people. 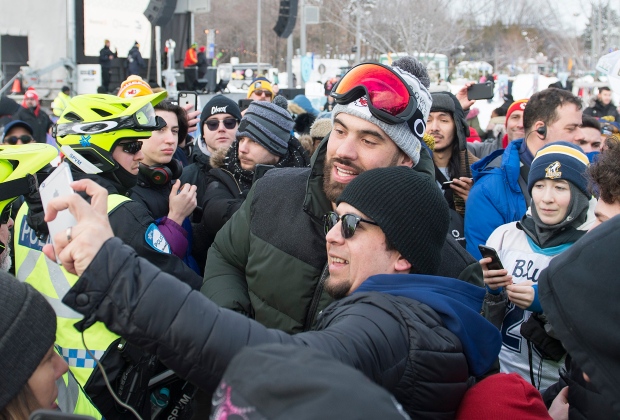 In the days before and after the Super Bowl there was an outpouring of love from all corners of the province for the football player. Duvernay-Tardif said the full extent of LDT Mania hasn’t quite sunk in yet.

“What a blessing. I really feel honoured and privileged. You’re talking about my schedule to me and I’m like ‘Oh my God, this is crazy.’ If I can use that to promote my future project, my foundation and all the things I really believe in, it’s going to be a really big plus for me and the fans.”

"I got in last night and I went to get some food across the street from where I live and there were probably four or five cars that rolled down the windows and went 'LDT! This is awesome!' I was dressed up because it was like -20 outside and was like 'How did they recognize me?'"

Now that he’s a Super Bowl champion it doesn’t seem Duvernay-Tardif will ignore his roots to hang out with Hollywood stars. He did recall celebrating the victory with one Chiefs fan who hangs around the locker room named Paul. It took a friend to remind him of that fan’s full name: Paul Rudd.

“I don’t watch a lot of movies,” he explained.

Will make trip to Washington

As for whether he would make the journey to Washington D.C. to meet with American president Donald Trump, Duvernay-Tardif said he does plan to go. Several championship teams have declined to meet with Trump since his election in 2016, including members of the 2016 New England Patriots, the 2016-17 Golden State Warriors and the 2016-17 Pittsburgh Penguins.

"I'm not going to talk about my political opinion about the States, but I've never been to Washington," he said. "I want to go and see what it's like. I know a lot of people have said no in the past but if the team is going, I'm going. I think it's going to be interesting."

While he's the first doctor to ever win a Super Bowl, Duvernay-Tardif said he doesn't plan to do his residency during the offseason but that doesn't mean he won't keep up his medical knowledge.

"My interest is in emergency medicine and I feel it wouldn't be the optimal learning experience to do it part-time, so I will wait until football is over," he said. "I do have a few friends I started medical school with who graduated in 2015 and now they're done their residency. They're practicing in a few Montreal hospitals and it's a great opportunity for me to shadow with them."