The Montreal metro’s Blue Line is getting five new stations in the city’s east end, at a cost of $6.4 billion, a project that has been in talks for three decades.

Officials from all three levels of government made the announcement Friday afternoon, saying excavation work would begin in 2023 for a planned opening by 2029.

Most of the funding will come from the Quebec government, with $1.3 billion from the federal government.

The five new metro stations would be located along Jean-Talon Street at the intersections with Pie-IX, Viau, Lacordaire, and Langelier Boulevards, and at Bélanger Street, on either side of Highway 25, for the Anjou terminal station. 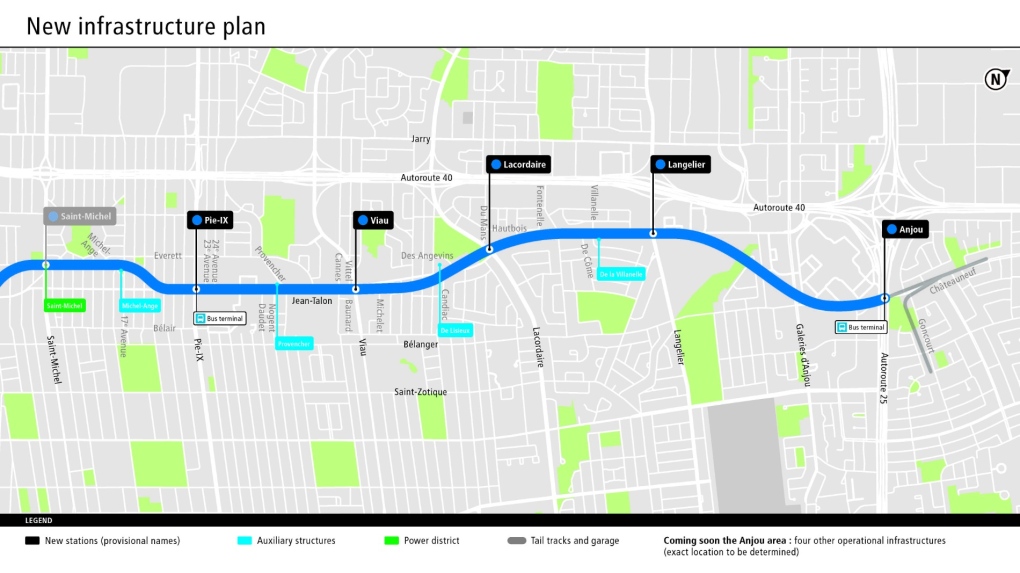 The Montreal metro's blue line is set to get five new stations.
The transit project’s goal is to better serve the city’s east end, connecting it to the planned REM de l’Est light rail system, as well as commercial arteries and the Galeries d’Anjou.

"The Blue Line will go to Anjou. The project has been improved to open up a complete population who will now have access to a public transportation system worthy of the name," said Quebec Junior Transport Minister and Minister for Montreal Chantal Rouleau, adding that it aims to improve "mobility in the metropolitan region and to revitalize the east end of Montreal."

Rouleau made the announcement alongside federal Heritage Minister Pablo Rodriguez, Montreal Mayor Valerie Plante, and chair of the STM board of directors, Éric Alan Caldwell.

"Our administration has always made mobility a priority and we have worked tirelessly to make the extension of the Blue Line a reality," said Plante. The city plans to integrate the stations into economic development projects and living environments, including 13,000 new housing units that she said "will energize the area and the commercial arteries."

The Official Opposition at city hall called it a "step in the right direction," though it criticized the delays in recent years.

"The citizens of Saint-Leonard and Anjou have been waiting for this project for over 40 years. I hope this time it will be the right one," said Ensemble Montreal leader Aref Salem, saying he deplored "the inertia of the Plante administration, which has not exercised a tight control over the progress of the project with the Société de transport de Montréal. After numerous court cases and a project bill that is increasing by $15 million every month, it took the Quebec government to take the file in hand to finally move forward."

Friday marked the fifth time in 33 years politicians announced the Blue Line expansion project, which has been discussed various forms since 1979.

But this time, “I can assure you it's the right one,” said Rouleau.

"Citizens have waited too long," said Chantal Rouleau, adding that her government "will deliver the Blue Line."

To prove its seriousness, Rouleau said the Quebec government has given the STM the authorization to use a tunnel boring machine, a massive device used to excavate tunnels underground. According to the STM, a TBM digs twice as fast as traditional methods, such as blasting or drilling with a cutter.

In 2018, construction of the five new stations to Anjou was estimated to cost $3.9 billion and was scheduled to begin in 2020 with an estimated completion date of 2026.

The new $6.4 billion estimate takes into account inflation and delays that could be caused by supply chain issues.