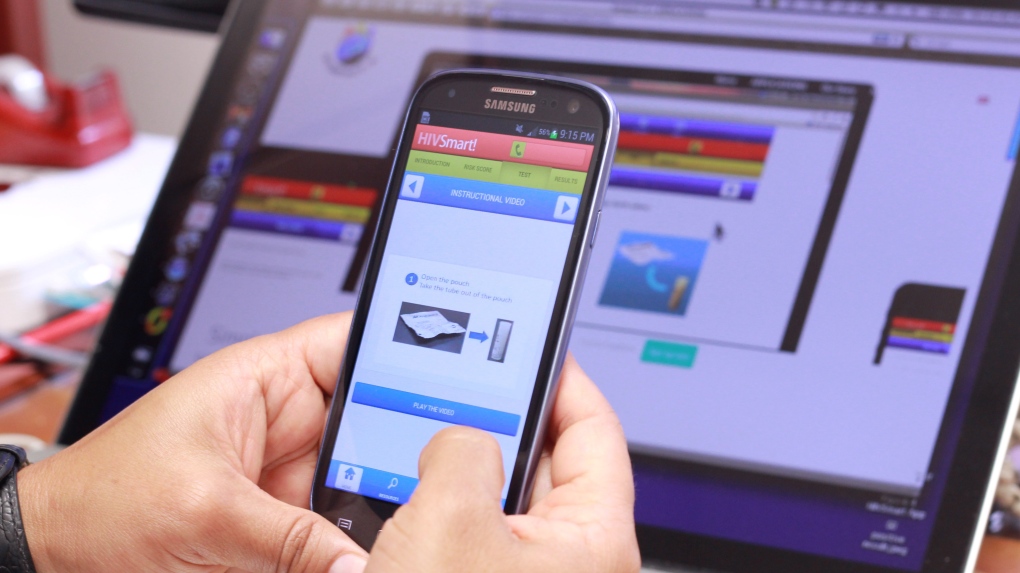 HIVSmart! is available for smartphone, tablet or web-based (Android, iPhone, and iPad). It is a confidential software app that was developed by a team at the Research Institute of the McGill University Health Centre. It informs, interprets and stores data confidentially but, most importantly, it links users to counselling or care quickly and encourages the user to stay in care. Initially developed with funding from Grand Challenges Canada, HIVSmart! was evaluated in Montreal. (THE CANADIAN PRESS/HO - Centre universitaire de sante McGill)

A group of Montreal researchers has developed a smartphone and tablet app that they say could help people to detect HIV through self-testing -- if such tests are approved in Canada.

Researchers from the McGill University Health Centre and a Montreal health clinic tested the HIVSmart! app among 451 people during a study that took place in 2016 and 2017.

Participants were given a saliva-based self-test and a tablet with the app, which guided them through the process of performing and interpreting the test, storing results and connecting them to care.

Of those tested, 0.7 per cent were found to have the virus and were linked to a physician the same day. The study noted that all of the results were found to be accurate when tested against more traditional detection methods.

The researchers concluded that the app-based process was "accepted and feasible" for the participants and has the potential to promote increased screening in populations that run a higher risk for HIV.

In Canada, those populations include men who have sex with men, injection drug users, Indigenous populations and immigrants from countries where the virus is prevalent.

"Promoting screening reduces the number of people who do not know their HIV status, puts HIV-positive people on treatment quickly so their viral charge becomes undetectable, and, ultimately, eradicate HIV," study co-author Dr. Rejean Thomas said in a statement.

Because at-home HIV self-test kits aren't yet approved in Canada, the participants took the tests in a clinical setting and the results were confirmed with a blood test.

The study was conducted in Montreal between July 2016 and February 2017 on men between the ages of 18 to 73 who have sex with other men.

Of those, almost 99 per cent found the app to be useful and 94 per cent said they'd be willing to recommend it to a friend or partner, according to the study published earlier this week in the Journal of Medical Internet Research.

The World Health Organization has recommended countries implement self-testing strategies as a way to reduce the number of people living with undiagnosed HIV.

A global strategy to eliminate AIDS includes a goal of having 95 per cent of all people living with HIV know their status by 2030.