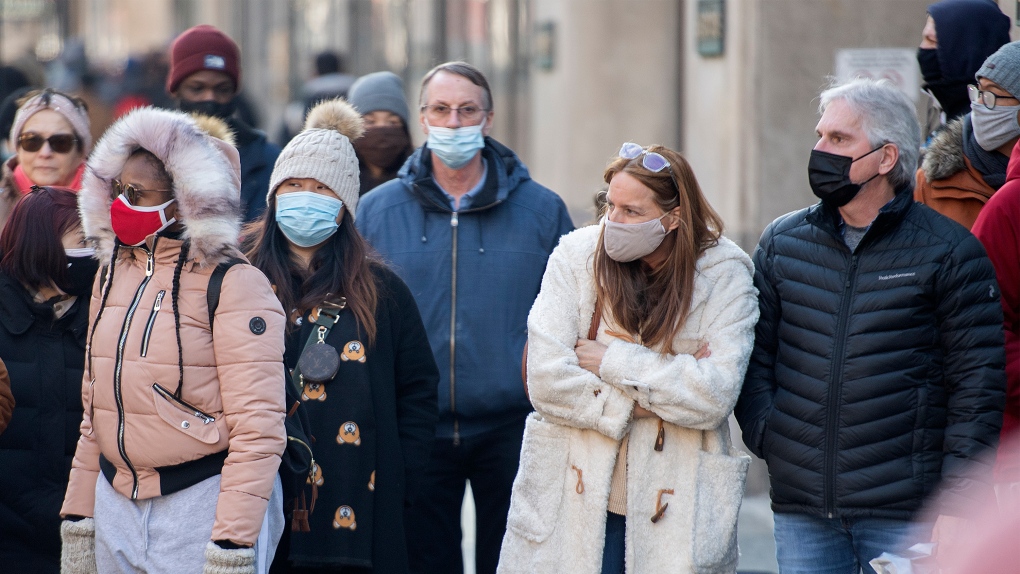 People wear face masks as they wait to cross a street in Montreal, Sunday, Feb. 14, 2021, as the COVID-19 pandemic continues in Canada and around the world. THE (CANADIAN PRESS/Graham Hughes)

MONTREAL -- Montreal’s public health director indicated her department is on a mission this month to squelch as many variant cases as possible in Montreal and accelerate vaccination of the elderly population before a possible third wave strikes.

“Knowing that we may see a third wave ahead of us, it is important to protect the most vulnerable population as soon as possible,” Dr. Mylene Drouin said in a news conference on Wednesday.

Her words echoed those of Quebec Health Minister Christian Dube, who on Wednesday called this period “the calm before the storm.”

Drouin said that’s also why the Montreal region reversed course on vaccinating caregivers who are 60 years and older, who would be accompanying a senior who is 70 years plus - a widening of the vaccination window announced Tuesday.

“Right now the ministerial directive is really 70 and over and there have been corrections in relation to this,” Lynne McVey, CEO of the Montreal-West CIUSSS, who was also present, explained.

McVey said people who are 70 years and older are at higher risk of complications and death than the age group below and need to get the shot first.

Drouin said they will soon offer guidance to the caregivers who are 60 plus who made appointments Tuesday, before Wednesday’s correction was made public.

The vast majority of variant cases in the province have been detected in Montreal and are of the B.1.1.7 variety, first found in the U.K.

Last week, variants represented 12 per cent of new COVID-19 cases on the island, but that has increased to 15 per cent in the last couple of days, Drouin said.

They are mostly clustered in the following neighbourhoods: Cote-St-Luc, Snowden, Cotes-des-Neiges and Outremont.

Montreal’s public health department is managing 43 outbreaks in schools associated with the variants.

Drouin said that might seem like a high number, but “we’re being more aggressive and when we have one case of the [presumed] variant in a setting, workplace or school we declare it as an outbreak.”

That out of 43 schools, 26 have only one case each and there are very few schools with five or more cases, which she described as “a positive sign.”

The number of outbreaks in Montreal has been declining, Drouin said. While most of them are being seen in school-aged children and people in their households, out of 324 others, 28 are in workplaces, seven are in daycares and there is a handful in public and private seniors' homes.

The variant is likely to become the dominant strain by the end of March or the beginning of April, according to current Quebec public health institute modelling (INSPQ), Drouin said. The estimates are updated weekly.

But it’s a race against time, Drouin said, and a question of when and not if the B.1.1.7 variant will take hold because it is highly contagious.

“We know it's going to happen, so we’re worried, but at the same time we do have the strategy to prevent super

spreader events” to try and delay community spread of the variant for as long as possible, said Drouin.

The health officials said vaccination will be the key to preventing hospitalizations and deaths in elderly people and so they encourage seniors over 70 to make appointments, and ask family members to help them register online if they need help.

Since the mass campaign started just a few days ago, 20,000 seniors have been inoculated.

Already 35 per cent in the 80 and older priority group have received their first dose as have 11 per cent of those 70-79.

The process is expected to go more rapidly now that they have enough doses for everyone older than 70 in Montreal, and since they are making improvements daily to how the mass vaccination centres are being operated, said McVey.