MONTREAL - Police slapped 288 demonstrators with fines of $637 for participating in an illegal demonstration in Montreal Saturday, while another four men and one woman, aged between 19-14 were arrested on a variety of charges, including armed assault on a police officer and mischief.

The eighteenth annual anti-police brutality protest began at 3 p.m. Saturday at Chateaubriand and Jean Talon, but as organizers failed to provide an itinerary, the demonstration was declared illegal three minutes later and police briefly detained those assembled and handed out the fines and made the five arrests.

Municipal bylaw P-6, enacted during the 2012 student protests, requires demonstrators to provide police with an itinerary and route of a protest before it begins, a requirement that was not respected, police say.

Police dressed in riot gear kettled a group of protesters on Chateaubriand St. south of Jean Talon St., not far from Jean Talon metro station, where the demonstration began.

At one point, the protesters split into two groups, with one small group were travelling on adjacent streets while the larger group was kettled.

A 22-year-old protester sustained a minor injury and was attended to on site by paramedics.

Metro trains on the Orange and Blue lines bypassed Jean Talon for an hour as police carried out their operation.

The group that organized the event set out a news release Saturday evening criticizing the police's reaction.

"It's without surprise but with a lot of rage and indignation that the (Collective Opposed to Police Brutality) condemns the mass arrest that ended in the 18th demonstration against police brutality few minutes after it started," the release says.

The group condemned the police for acting the way it did, saying that last year, the police were lenient in enforcing the bylaw and tolerated marches where the itineraries were not provided in advance.

The march is an annual ritual of spring in Montreal since 1997 and regularly leads to dozens of arrests and fines, with the highest-ever police roundup taking place in 2002 when 370 were detained. 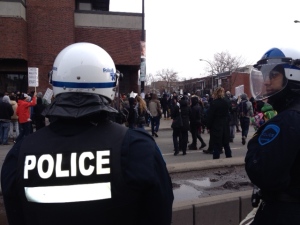 IN PHOTOS: Protest against police brutality