MONTREAL -- Montreal and Laval's 8 p.m. curfew will return to 9:30 p.m. as of Monday, May 3, Quebec Premier Francois Legault announced Tuesday,

Legault said the situation is improving, as cases in several regions continue to trend downwards. In Montreal and Laval, the “expected explosion” has not occurred, he said.

“This makes us optimistic, but prudently so,” said the premier. “We are really finishing up in this tunnel, but we don’t want to be hit by the train on our way out.”

Some restrictions are being maintained, however, and even extended.

“There really is no leeway in the Outaouais region,” he said, adding that lockdown measures will be extended there by one week, to May 9.

Elementary schools, as of next Monday, and most service centres in the Quebec City region and Chaudiere-Appalaches regions will reopen, with the exception of the Beauce-Etchemin and Bellechasse area.

Health Director Arruda also announced that a Quebecer has died due to a blood clot after receiving the AstraZeneca vaccine.

"I would like to present my sincerest condolences and sympathies to the family," said Arruda.

The province will continue to administer the vaccine, since COVID-19 itself presents a higher risk of blood clotting.

Legault said the woman was 54 years old, and "in good shape." Arruda said he would not confirm where in the province she lived.

There are approximately three people still under surveillance for blood clotting, though its not confirmed whether those cases are a result of the AstraZeneca vaccine. 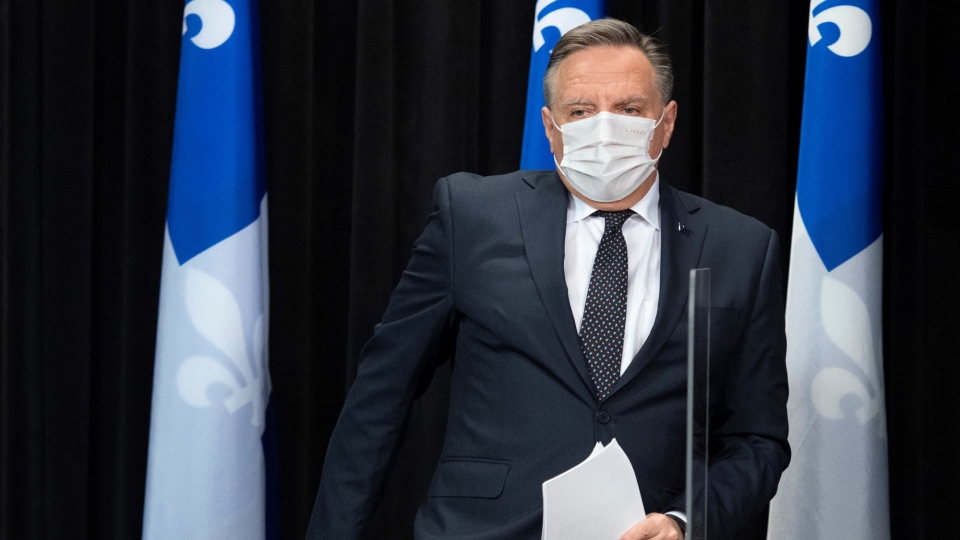 Quebec Premier Francois Legault walks in a news conference on the COVID-19 pandemic, Tuesday, April 27, 2021 at the legislature in Quebec City. THE CANADIAN PRESS/Jacques Boissinot

The province maintained its goal to vaccinate at least 75 per cent of the population by June 24 with at least one dose.

Officials faced several questions on what vaccinated people will be able to do, and whether pandemic restrictions will still apply to them.

"Immunity is not sufficiently high" to allow all restrictions to be lifted, said Arruda. "It's coming," he said, adding that he wasn't yet ready to make any promises.

Legault maintained his optimism, though, without getting too specific. "It will be better than last summer, because of vaccination," said the premier. "Unfortunately, I dont have the answer yet."

Dube hinted that some sort of vaccine passport is in the works for Quebec.

I've always talked about a “vaccination proof,” he said, adding that there will be another announcement on Friday with regards to the possibility of vaccine passports in Quebec.