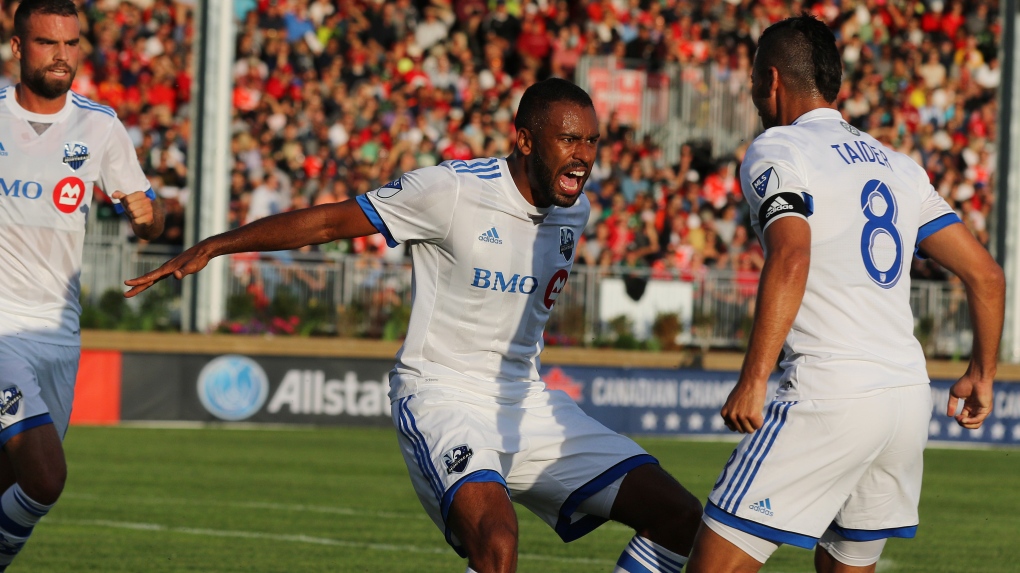 CALGARY -- All the Impact had to do was hold Calgary's Cavalry FC scoreless in the second leg of the Canadian Championship final.

They did that and more.

Anthony Jackson-Hamel scored the only goal of the game as Montreal advanced to the Voyageurs Cup final with a 1-0 win over Cavalry FC.

"When you score an away goal in a Cup game, it's always very important," said Montreal coach Remi Garde. "We knew that probably we had to score at least one. Coming here it was 2-1 (on aggregate) for us. We knew that because of the field and because of the way they can play here, we would have time under pressure."

Impact goalkeeper Clement Diop made three saves to record the shutout for Montreal in front of a crowd of 5,633 fans at Spruce Meadows' ATCO Field.

After winning both matches against Cavalry FC, 3-1 on aggregate, the Impact will play for the Voyageurs Cup next month against defending Canadian champion Toronto FC, which beat the Ottawa Fury 3-0 earlier on Wednesday to win the other semifinal series 5-0 on aggregate.

"I'm glad we got the win and we can go to the final now," said Impact midfielder Shamit Shome, an Edmonton native who played soccer for the University of Calgary. "It's kind of like a trip down memory lane coming back and playing here."

Calgary had a good chance to score in the eighth minute, but Mauro Eustaquio's hard shot from outside the box was deflected, making it easier for Diop to make the save.

"We were ready, we were eager and we were hungry," said Cavalry defender Mason Trafford. "We had a lot of belief that we were going to turn the tide. They knew that they were in for 90 minutes of a hard battle. I thought we had a lot of pressure on their back line, but just unfortunately we couldn't do it for the fans."

The Impact opened the scoring in the 13th minute when Jackson-Hamel headed Saphir Taider's corner kick past Cavalry goalie Marco Carducci, who got his hand on the ball before it trickled across the line.

Calgary continued to press and it nearly resulted in a goal when Dominick Zator headed a corner kick by Jose Escalante on net, but Dior leapt in the air to knock the ball over the net.

Montreal's Jorge Correales received a yellow card in the 35th minute after he slid to get the ball, but instead tackled Calgary's Julian Buscher in the process.

With time winding down in the first half, Buscher had another scoring chance for Calgary but his hard shot hit Montreal's Bacary Sagna right in the face.

"I would like to congratulate my team because tonight we fought," Garde said. "As a team we fought on every ball. We knew that it was going to be this kind of game. I think if we could do that every game in terms of togetherness, we could be a much stronger team."

In injury time, Zator booted a shot from 12 yards out just over the net before time expired.

The Impact had a good chance to extend their lead in the 64th minute when Lassi Lappalainen received a through ball from Maxi Urruti before letting go a shot that went wide of the net.

Calgary finished with just three shots on target but 18 shots overall as Montreal put up a solid defensive effort.

"I'm immensely proud of this group of players and this football club," said Cavalry coach Tommy Wheeldon Jr. "We talked about in the locker room, we're going to give everything that we have and we've left here with exactly that. We've given everything we have and it was a tale of a set play either way, because if we scored it and they didn't, we're going through."