People gathered on a wet and gloomy Tuesday to commemorate the 14 women killed during the École Polytechnique shooting 33 years ago.

At 5:10 p.m., the same time when the first shots were fired in 1989, survivors and dignitaries laid white roses on a podium while 14 beams of light illuminated the sky above the city.

On Dec. 6, 1989, a man motivated by a hatred of feminists shot and killed 14 women and injured 13 other people at the Montreal engineering school.

“We are here again as we are every year, gathered to remember the 14 young women — 14 brilliant young women — who were killed simply because they were women,” Prime Minister Justin Trudeau said just after the ceremony.

“And 33 years ago may seem like a long time, but for some of us, it feels like yesterday. The fact that we are still crying over murdered women in Winnipeg and across the country in the news these days means that we have so much more work to do to fight against gender-based violence.” 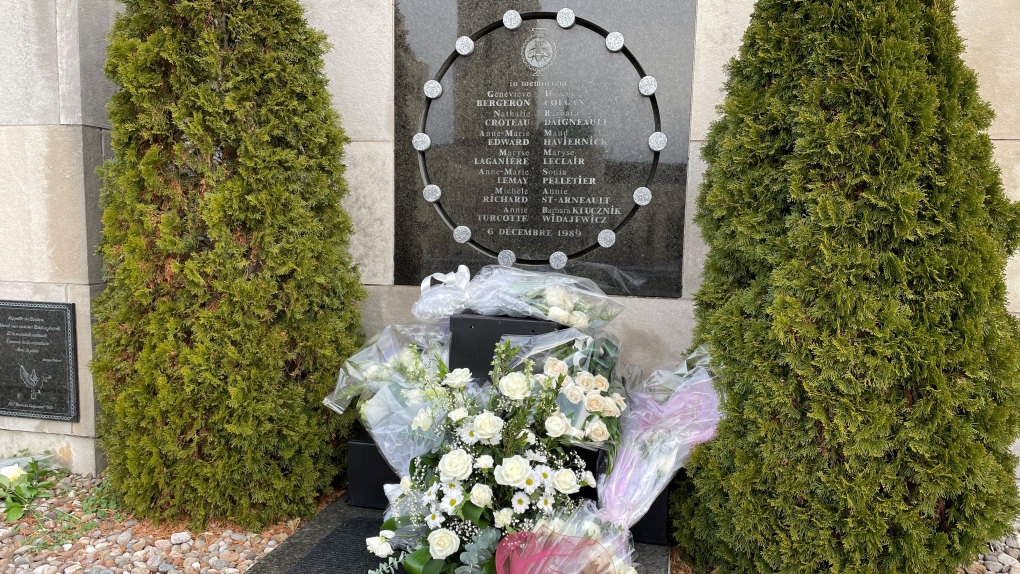 A plaque for the victims of the Polytechnique shooting in 1989 that killed 14 women. (Jonah Aspler/CTV News)

Mayor Valérie Plante said that it was very important for the City of Montreal to keep organizing and commemorating the vigil.

She said there is much work to be done to better protect girls and women and ensure that the city’s citizens are safe.

“There’s a lot of citizens that are here tonight because we need to be together so we can remember what happened.”

A wreath-laying ceremony was held Tuesday morning to mark the anniversary. 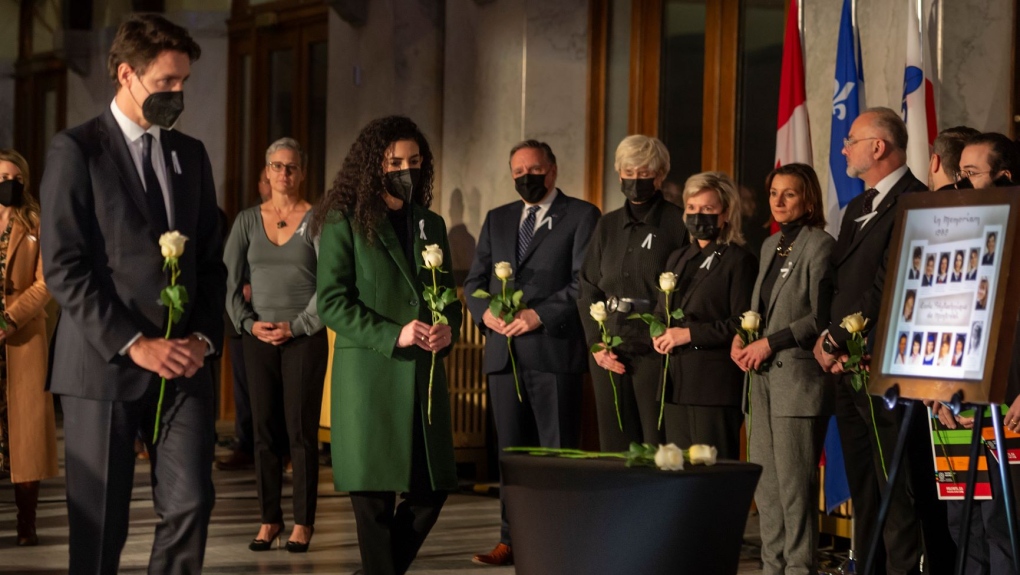 Prime Minister Justin Trudeau and Outremont MP Rachel Bendayan lay single white roses to commemorate the victims on the 33rd anniversary of the Ecole Polytechnique mass shooting in Montreal, on Tuesday, December 6, 2022. On Dec. 6, 1989, a man motivated by a hatred of feminists shot and killed 14 female students and injured 13 other people at the Montreal engineering school. THE CANADIAN PRESS/Peter McCabe

Under a biting wind, white rose wreaths were laid at a commemorative plaque near the student entrance of the building as a few dozen students and staff gathered. All wore white ribbons to raise awareness about violence against women and girls.

“It’s important to remember ... and it’s important to fight against violence against women just because they are women,” said Maud Cohen, president of École Polytechnique.

“It’s a really important moment, every Dec. 6, to have that time to remember who they were, why everything happened and why we need to make sure it doesn’t happen again.”

The morning ceremony is held annually, and members of the university community passed by the plaque to pay their respects — an important exercise for many on this day.

Émilie Thibault, a doctoral student in chemical engineering who laid one of the wreaths, said it was important to be present for the families of the 14 women.

“To show that we are here … to remember what happened and to make sure that we never forget it,” Thibault said. “And to prove that we are resilient and we never want an event like this to happen again.”

For Cohen, it’s also about remembering who the victims were.

“Today is a moment where we need to think about these young ladies who lost their lives back in 1989, but it’s also about remembering who they were and the dreams that they had,” Cohen said.

Earlier in the day, in Ottawa, Trudeau spoke about the importance of remembering the tragedy during his opening remarks at a meeting of municipal officials from across Canada.

“Today, as a Montrealer, I must mention Dec. 6,” he said. “At the time, I was in high school when it happened, just a few blocks away from École Polytechnique. I still remember, and I always will. We must take a moment to remember that violence against women continues. And with the pandemic, we saw an increase in violence and mental health issues.”

The anniversary of the mass shooting was proclaimed National Day of Remembrance and Action on Violence Against Women in 1991.

-With files from Lee Berthiaume in Ottawa