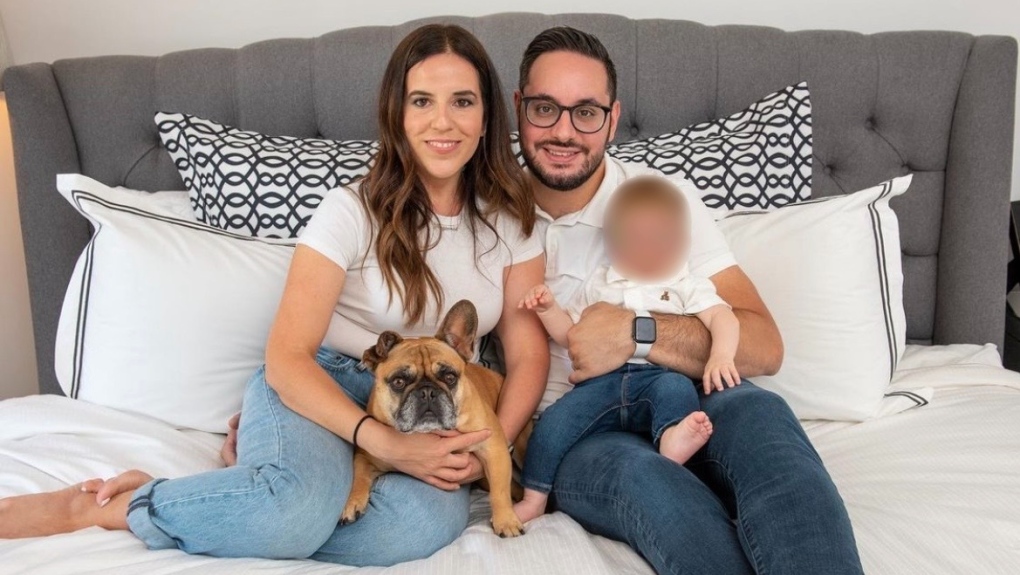 Melissa Piccioni says she never expected to be caught in a web of administrative confusion on her journey to expand her family. (Courtesy: Melissa Piccioni)

Melissa Piccioni said she never expected to be caught in a web of administrative confusion on her journey to expand her family.

After trying for three years to get pregnant, the 38-year-old says she was diagnosed with unexplained infertility, where doctors don't know why she may have difficulty conceiving a child naturally.

"They just know that I have difficulty getting pregnant, and when I do get pregnant, I've also had a few miscarriages, so there's an issue with that," Piccioni told CTV News.

Following her diagnosis, she said she and her husband underwent one round of in vitro fertilization (IVF) and three rounds of intrauterine insemination (IUI), where sperm are placed directly into a woman's uterus.

Soon after, the couple welcomed a healthy baby boy.

"This led us to now wanting to grow our family even more and give our son a little sibling," Piccioni said.

At the time she was trying for her son, the Quebec government didn't cover fertility treatments.

Now, thanks to the new Medically Assisted Reproduction (MAR) program, Piccioni said she was grateful for the chance to expand her family without suffering financially.

Yet, after one unsuccessful IUI treatment a month ago at the Montreal Fertility Clinic, Piccioni said she was told some startling news.

"I found out I wasn't pregnant, and I told them [the clinic], and they said, 'Well, unfortunately, we can't see you or take you for any more rounds of IUI because we've met our quota,'" she said.

She asked for clarification.

"She [the nurse] says, 'The government has put in place a quota, and we've reached our maximum, so you, unfortunately, cannot get any treatment."

Piccioni said she was shocked to hear that even if she wanted to pay out of pocket to continue her treatments, which she had already started a slew of medications for, she was not allowed. She said she felt stuck.

"What do I do? Do I start over? Do I go to another clinic that's completely private? Do I seek treatment in the U.S.?" she asked, noting that it would cost her at least $10,000.

"I was a mess. I was infuriated. I couldn't believe it. I faced so many hurdles to get to this point... Not only am I facing a physiological barrier; I now have this other barrier that's in front of me, so that's difficult."

The Montreal Fertility Clinic tells CTV News its hands are tied, claiming the Quebec government has instilled a quota on the number of IUI cycles it can do.

"On April 15, we stopped doing IUI cycles for eligible patients because we have already reached our quota and [are] now waiting for the government to increase their annual quota so we can continue performing IUI," the clinic said.

Quebec government refutes this claim, stating, "There is no quota stated by the Health Ministry on the number of activities performed, beyond the criteria for insured services set out in the law."

"We are sensitive to the situation and the challenges faced by couples in these situations," the Ministry states. "Fertility clinics may have waiting lists based on their capacity."

Insured services under the MAR program include one round of in vitro fertilization (IVF), oral or injectable non-IVF ovarian stimulation, up to six donor inseminations (IUI) and up to six straws of sperm from a donor bank.

"It is possible for a person who is not eligible for insured MAR services -- for example, a person who has already completed an insured IVF cycle -- to pay 'out of pocket' for services that are not insured," the government added.

Piccioni said she is immensely grateful for her son, but still feels the emotional stress of the situation.

"I have one child, I'm happy, but it's still emotional," she said. "Just the fertility process itself is extremely emotional. When you're in it, it's sad to say, but that's really all you concentrate on, and it really takes up a lot of your time and a lot of your headspace, and it's super, super challenging to go through, and you really need to be strong."

The medically assisted reproduction program has been available since Nov. 15, 2021.

The government invites anyone looking to take part in the MAR program to click here.