Parks and spaces to play and were top of mind for Montreal’s municipal parties Thursday as they continued their election campaigns.

If re-elected, Valerie Plante's Projet Montreal says it plans to turn a minimum of 15 vacant lots into sports fields over the next four years.

The party said it will invest $3.3 million during its next mandate to transform underused spaces, mainly owned by the city, into playgrounds where hundreds of children, teens and adults can do physical activity.

"Sport is a powerful tool for inclusion and promotes physical and psychological health,” said Plante.

“These transitional facilities will improve the quality of life in the neighbourhoods where they will be built. They will also allow quickly provide Montrealers with places to exercise and meet each other.”

The lots will be developed into basketball courts, soccer fields and floor-hockey spaces, among others. Three sports sites will be built in the first year, followed by four in the following three years.

“Every time I go to doors, young families, they tell me that we don't have enough space for the youth to play basketball, soccer,” said Côte-des-Neiges–Notre-Dame-de-Grâce mayoral candidate Gracia Kasoki Katahwa.

“I hear that every day in the borough. So I'm going to be able to meet that demand.” 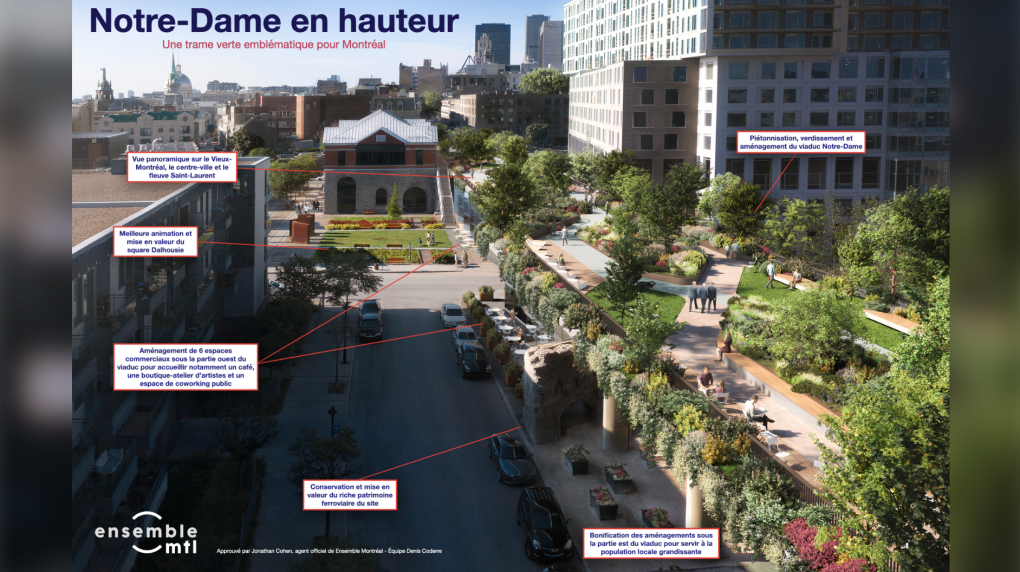 Meanwhile, Ensemble Montreal leader Denis Coderre and his team presented a $10-million development plan for the Notre-Dame Viaduct on Thursday. The project would be completed by 2025, they promised.

The party is proposing to transform the structure into a linear park, calling it “a space for sharing where culture will coexist with innovation.”

The re-imagined greenspace from Berri to Montcalm Street would comprise half a kilometre with a view of downtown, the Old Port and the St. Lawrence River.

“The viaduct, which is currently a block of asphalt, will become an emblematic gateway to Old Montreal," said Coderre.

"This brand new linear park will highlight the history and beauty of the city, improve the urban fabric, provide better access to nature for citizens and open up the area."

The western portion of the viaduct would also include six new commercial spaces.

This is a developing story and will be updated. With files from CTV News Montreal's Iman Kassam.

Pulled from a sunken trunk at an 1857 shipwreck off the coast of North Carolina, work pants that auction officials describe as the oldest known pair of jeans in the world have sold for $114,000.

Quebec's legislature has passed a law putting an end to the requirement that members swear an oath to the King. The Coalition Avenir Quebec government had tabled a bill on Tuesday making the oath to the monarch optional after three members of the opposition Parti Quebecois refused to swear the oath and were barred from sitting.