Montreal police (SPVM) says it seized an "unprecedented" amount of illicit drugs from a major drug trafficking network that was dismantled after a series of raids Wednesday.

The criminal network was able to sell roughly one million pills per week throughout Quebec, worth an estimated $5 million, they said.

"We are not done calculating and analyzing everything yet," said Renaud. "Amphetamines are synthetic drugs that are known to be popular with teens and young adults. Pills come in different colours and shapes. Those pills can also be found in powder, crystal, etc. Amphetamines are often cut with different products and can be very dangerous."

Officers conducted 28 searches Wednesday in Montreal, Laval, the Laurentians, Montérégie, Centre-du-Québec and Mauricie, including "major" searches in Saint-Leonard, Boucherville, Chambly and other regions throughout Quebec.

Police targeted multiple warehouses that were used for the production or storage of amphetamines or both.

While the focus was dismantling drug trafficking in and around Montreal, police say the seizure could make a dent in gun crime in the city. 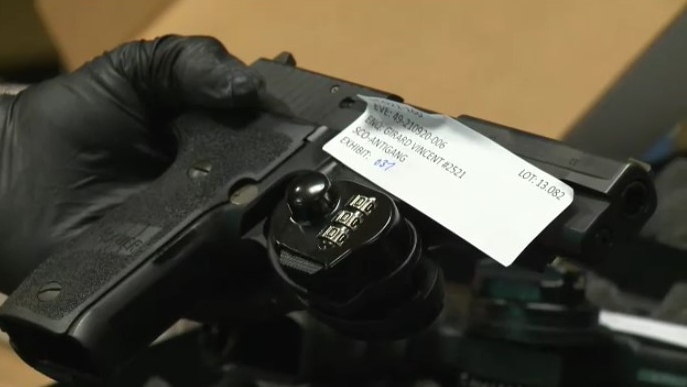 A Montreal police officer shows one of the guns that were seized in a major drug bust on Wednesday, May 25, 2022. (CTV News)

The second phase of the operation is expected to continue in the coming days with additional arrests and criminal charges after the files are reviewed by Quebec's Crown prosecutor's office.

Renaud says officers are working day and night to make the city's streets safe and investigations like Wednesday's drug operation can have impacts in other areas as well, noting the substantial number of guns and cash that were seized.

"By targeting the purchasing power of criminals, particularly with respect to their acquisition of firearms," he explained. "Today, of course, it's a little bit of the end of a file and what you see on the table is our part of what we can do to make sure those streets are safe for everybody."

Montreal police repeats that gun violence is a societal problem — not a policing one — and that solutions from city partners are needed to tackle the issue.

Police say they plan to present a complete report on the operation Thursday, with Montreal Mayor Valérie Plante praising the force for the work that was already done.

"Today, we see results. We see historic searches that, as Roy said, cut off the revenue that supports the purchase of firearms," Plante said. "When we see a rise in gun violence, we have to find all types of solutions."

A total of 280 police officers were involved in the operation, with help from Quebec provincial police and other agencies.

Convoy participant Pat King was involved in the planning and logistics of the Freedom Convoy protest, despite denials of his participation by organizers, according to court documents obtained by CTV News.