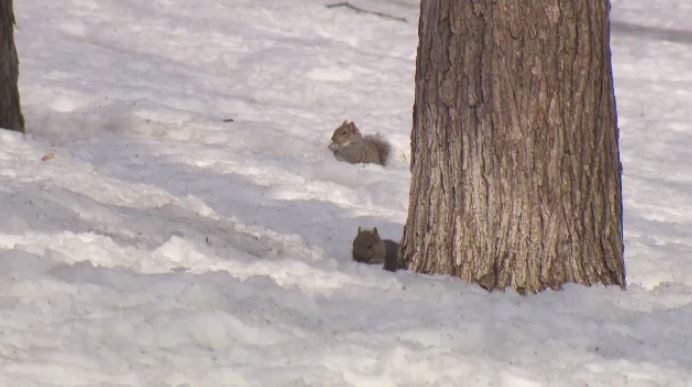 Looks like we got lucky: Montreal is dodging snowfall that fell in surrounding areas.

Temperatures stayed on the mild side, allowing a forecasted snowfall of up to 15 centimetres to instead fall as rain.

Temperatures of about 3 degrees are to thank for keeping us from having to pick up those shovels.

“There’s a narrow corridor with milder air and we’ve been seeing precipitation in the form of rain,” said Graham.

Meantime, the Eastern Townships are getting snow due to temperatures around the freezing mark, and areas east of Montreal, including Quebec City and out to the Gaspe Peninsula, are getting 15 to 30 centimetres of snow.

We’ll get a touch of snow, said Graham.

“Light rain is expected to change to light snow overnight as the temperature dips below freezing. We could see a few flurries to start the day on Saturday, but by noon, we’ll start to see the cloud peel back and we’ll be back into sunshine in Montreal for Sunday,” said Graham.

Temperatures are again expected to drop below the freezing mark early next week.

Milder temps in #Montreal mean more #rain than #snow but #SnowfallWarnings remain in effect east of the city for 20-30cm.
Send us your pics and we'll feature some of them on @CTVMontreal at 5 & 6!#qcstorm pic.twitter.com/5KY61LpkA5