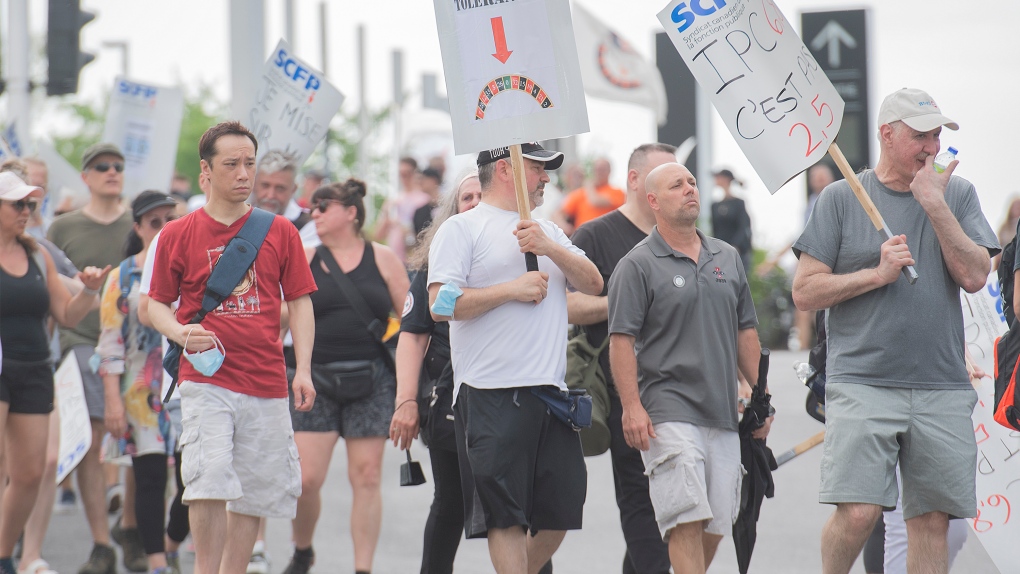 Croupiers take part in a march to the Casino in Montreal, Saturday, May 21, 2022, where they launched an unlimited general strike. THE CANADIAN PRESS/Graham Hughes

Croupiers at the Montreal Casino have been on strike for a week, and their union says the employer "has lost in profit the equivalent of what the croupiers are demanding at the bargaining table."

Represented by the Canadian Union of Public Employees (CUPE), the 521 unionized dealers at the Montreal Casino have been without a collective agreement since April 1, 2020.

Believing they were at an impasse in negotiations for the renewal of their collective agreement, the dealers went on strike last Saturday.

Despite the strike, the casino's activities are continuing, Loto-Québec management said Saturday. The gaming tables, restaurant, slot machines and shows are running normally, while the poker room is closed.

"Loto-Quebec is disappointed that the Montreal Casino dealers' union is continuing to strike when all the elements necessary to reach an agreement were available, especially since the last two years have been difficult for casino employees," management said in a statement.

The dealers are asking for a better arrangement of their daily schedule to reduce repetitive strain injuries.

"The casino is a Crown corporation that brings a lot of money into the public coffers to pay for our health and education services," said CUPE union consultant Jean-Pierre Proulx in a news release. "We want to continue to do our part to fill those coffers, but we can no longer do so at the expense of our health. At the moment, the dispute is about 15 minutes per day of break time that the employer does not want to pay for."

For its part, the employer says the Montreal Casino dealers are asking for 30 minutes of paid break for each hour worked, when they are already entitled to two hours of paid break during an 8-hour shift.

Loto-Québec adds that it has not observed the increase in injuries mentioned by the union.

CUPE also accuses the employer of wanting to pay new recruits at 90 per cent of the lowest salary scale. Management says that the entry-level salary is more than 20 per cent above market.

Loto-Quebec says it wants to reach a "responsible negotiated agreement," noting that negotiations are taking place within "similar parameters to what has been agreed to by the same CUPE-affiliated employment bodies at other Loto-Quebec casinos, including the Casino du Lac-Leamy dealers."

As Senate-confirmed justices end Roe, how will voters react?

Republicans are heading into a November midterm election that is poised to swiftly become a referendum on the court's decision to overturn Roe v. Wade, as voters decide which party should control Congress