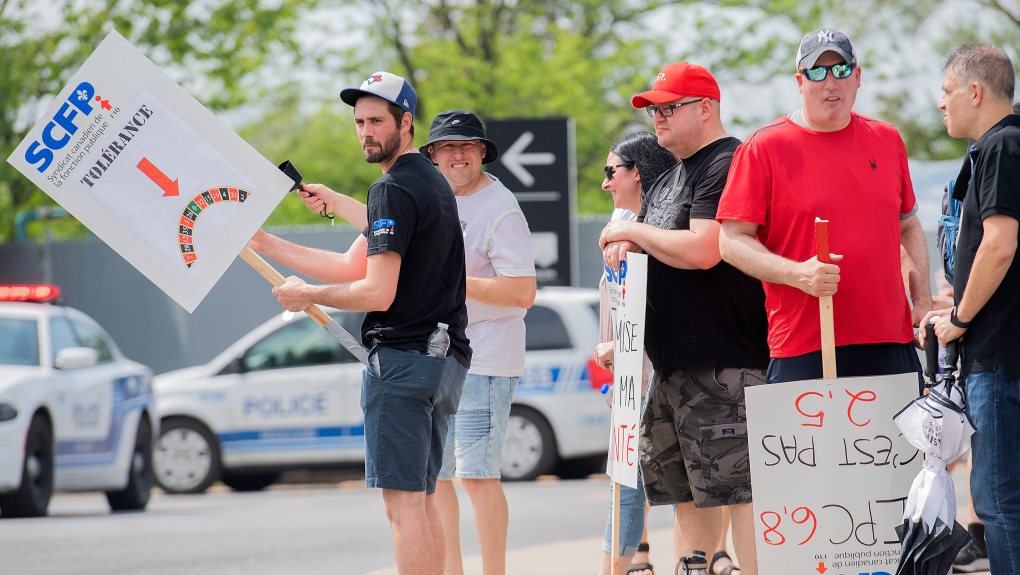 Croupiers protest outside the Casino in Montreal, Saturday, May 21, 2022, where they launched an unlimited general strike. THE CANADIAN PRESS/Graham Hughes

They will demonstrate Sunday afternoon in Montreal.

The demonstration is scheduled to start at 2 p.m. at the Jean-Drapeau metro station and go to the Montreal Casino.

Believing they were at an impasse in negotiations for the renewal of their collective agreement, the dealers began their strike on Saturday, notably by setting up a picket line in front of the casino in the afternoon.

Despite the strike, the casino's activities continued, said Loto-Quebec management on Saturday.

The gaming tables, restaurant, slot machines and shows are running normally, while the poker room is closed.

The croupiers are asking, in particular, for a "better arrangement of the time worked and the time of rest to avoid the injuries," explained Jean-Pierre Proulx, union adviser of the Canadian Union of Public Employees, in a communiqué.

He believes the number of employees suffering from work-related injuries is "staggering."

In a news release, Loto-Québec says it offers safe and optimal working conditions to its employees, but the Montreal Casino dealers are asking for a 30-minute paid break for every hour they work.

"This means that they spend more than 30 per cent of their shift on paid breaks, which is out of the ordinary in the industry and in the company's other casinos," said management.

Salary conditions are also at the heart of negotiations, as the union affiliated with the Quebec Federation of Labour (QFL) accuses the employer of wanting to roll back dealer pay to the level that prevailed in 2017.

"Loto-Quebec wants to create a new pay scale that would see the next employees hired earn 90 per cent of the base salary in the collective agreement. In a context of labour shortage, this is downright irresponsible, and the union will never accept it," said Proulx.

Management says the entry-level wage is more than 20 per cent above the market rates.

Loto-Quebec says it wants to reach a "responsible negotiated settlement," noting that negotiations are taking place within "similar parameters to what has been agreed to by the same CUPE-affiliated employment bodies at other Loto-Quebec casinos, including the Casino du Lac-Leamy dealers."

The 521 unionized dealers at the Montreal Casino have been without a collective agreement since April 1, 2020.

At least six people died and 24 were wounded in a shooting at a July Fourth parade in the Chicago suburb of Highland Park, and officers are searching for a suspect who likely fired on the festivities from a rooftop, police said Monday.