Montreal-area retailers reopening to public, with distancing measures in place

MONTREAL -- Eager shoppers lined up outside some stores in downtown Montreal on Monday as retailers in the city were allowed to reopen for the first time since a partial lockdown was imposed in March.

Masks, Plexiglas barriers, frequent disinfecting and no-touch browsing were some of the measures put in place by retailers who chose to open their doors, while customers were being asked to remain spaced apart and follow hygiene protocols.

On Ste-Catherine Street, the city's main shopping thoroughfare, dozens of people lined up outside a downtown Zara outlet, many eager to get summer clothes.

They were greeted at the door by masked employees and a hand-sanitizing station, while a sign warned that the number of customers would be limited.

Zuleyha Sen said she was going to get new clothes for her almost eight-year-old son. She said he'd grown since last year, and online orders have been delayed due to the pandemic.

"I won't go in for a long time, I'm just hoping to grab several things," said Sen, who said she felt safe even without a mask.

Outside H&M, Sami Derian emerged with a bag of pants and T-shirts. He said he was "excited" to be out shopping and had no concerns about his safety.

"A lot of people are getting depressed. I think it just helps people to be able to get out and see people outside. It just feels good," he said.

Derian said the experience was a good one, even if he had to buy clothes without trying them on.

The provincial government is allowing retail stores in the hard-hit region to reopen, as long as they can be accessed directly from outside and customers can keep a safe distance from one another. 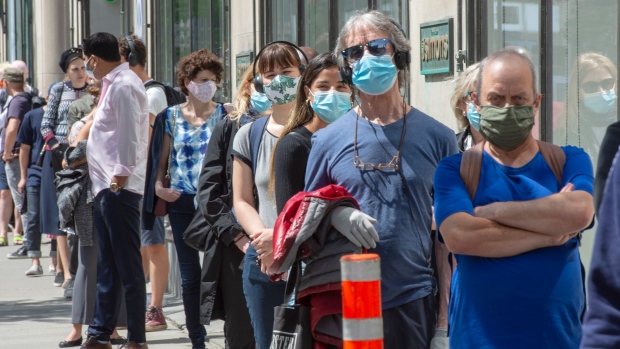 Customers line up at Simon's department store as many non-essential businesses are allowed to re-open Monday May 25, 2020 in Montreal. THE CANADIAN PRESS/Ryan

Some store owners have said they're adapting to the new reality by limiting customers and offering appointments, contactless payment methods and options to collect orders made online.

At Brown's shoes, several customers milled around as they perused displays of shoes on sale, aided by workers wearing gloves, masks and visors.

Eric Ouaknine, a director of retail experience for the company, said he was pleased with how the first hours were going. He said that while there were fewer customers than pre-pandemic, those who came appeared to be serious buyers.

"I don't believe (traffic) is going to be what it's been. That being said, I feel the people who are coming in are here to buy," he said in an interview. "Less browsing, more buying."

On the other hand, he acknowledged it could be a challenge to maintain a two-metre distance between employees and customers, and virtually impossible to sell shoes without allowing people to try them on.

"People like to touch the shoes and you can't stop then from doing that, but what we can do is have them sanitize their hands before entering the store, and that's the best we can do," he said.

Montreal is a Canadian hot spot for COVID-19, with more than 24,000 cases as of Monday. But despite the numbers, many shoppers said they weren't worried about their health.

The province has repeatedly urged customers to wear non-medical face masks when out in public but has stopped short of making them mandatory. On Monday, while many customers wore them, the choice was far from universal.

Louise Allard, who wore a white cloth mask as she waited at Simons, said she was concerned by a lack of face coverings and physical distancing.

"When I see the majority of people don't have masks, it worries me," she said.

Non-essential shops outside Montreal were allowed to reopen May 4. Legault announced Monday that shopping malls outside the Montreal area will be allowed to open June 1, along with hairdressers, estheticians and other personal care providers outside the city.