The daily update stated among the 15 people admitted to hospitals across the province due to the coronavirus in the last 24 hours, seven were unvaccinated, but eight had their second dose of a vaccine more than seven days ago.

But that doesn’t mean vaccines aren’t working, according to an infectious disease specialist who says it’s wrong to compare vaccinated and unvaccinated hospitalizations at face value for a number of reasons.

Dr. Donald Vinh, with the McGill University Health Centre (MUHC), says it’s difficult to pinpoint the exact reasons without having all of the data, but notes one possible reason is that breakthrough infections can — and are expected to — occur because the vaccines are, as experts have said for months, not 100 per cent effective.

That’s even more true for people with compromised immune systems, including cancer patients, someone on dialysis, a transplant recipient or anyone on certain types of medications that weaken the immune system.

“So, when we look at those numbers, we shouldn't see that in any way as being a failure of the vaccine,” he said. “We should realize that there are people who have failing immune systems and that the vaccine cannot necessarily be as great a response in them.”

Another possible explanation is that some immunocompromised people who are eligible for a third booster shot, as recommended by public health, have not yet received it.

This can be for a number of reasons: they are waiting for the required interval between their second shot and the booster shot, they haven’t decided to get the booster, or they are considered immunocompromised but aren’t on the list of people eligible for the booster (an elderly person living in a community dwelling that is not a CHSLD or someone with down syndrome, for example).

“Those contribute to some of the cases that we're seeing,” Vinh said.

Another key thing to remember is that it’s easy to compare vaccinated people who are hospitalized versus unvaccinated people in hospital, but it doesn’t paint an accurate picture of the current situation. 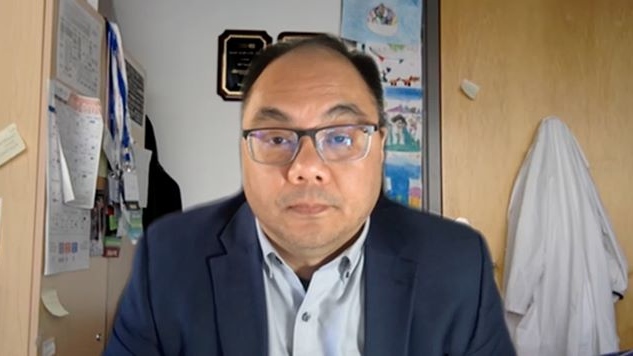 On Wednesday, the latest provincial data showed 6,512,777 people out of Quebec’s total population of 8,574,571 people had received two doses of the vaccine, which translates to roughly 75 per cent of the province.

If eight people out of 6,512,777 are sent to hospital with the coronavirus, that rate of hospitalization would be approximately 0.00012 per cent.

But when you have seven unvaccinated people hospitalized, as was the case Wednesday, out of the total unvaccinated population — about two million people — the rate is much higher at 0.00033 per cent.

“That gives you the true reflection of how good the vaccines are,” said Vinh.

“For example, when you buy a bag of apples, you can have 20 apples in there. One of them can be rotten. You can buy a bag of … five oranges and one of them is rotten. And then you could say, look, the number of rotten apples is equal to the number of rotten oranges so, therefore, they both rot at the same rate. But, in fact, that's not true because one out of 20 is not comparable to one out of the five.”

TWO DOSES REDUCE RISK OF HOSPITALIZATIONS BY 95 PER CENT: STUDY

Last week, Dr. Gaston De Serres, an epidemiologist with Quebec’s public health institute (INSPQ), co-authored a study of two-dose effectiveness by vaccine type, the interval of doses and the time since the second dose among people 18 and older in Quebec and British Columbia from May 30 to Oct. 2, 2021.

The study, which has not yet been peer-reviewed, showed that two doses of the vaccine were associated with a 95 per cent reduction in the risk of hospitalization.

“[Vaccine effectiveness] exceeded 90 per cent against SARS CoV-2 infection when at least one dose was an mRNA vaccine, but was lower at ~70 per cent when both doses were ChAdOx1,” according to the study.

The vaccine was said to also be more effective against infection and hospitalization with a seven to eight week interval between first and second doses compared to the manufacturer’s recommendation of three to four week intervals.

The study’s data also claimed that vaccine’s effectiveness against hospitalization remained stable even seven months after the second dose.

‘WE’RE NOT DOING ENOUGH TO PROTECT THEM’

On Friday, Quebec reported there were 21 people hospitalized with COVID-19 in the last 24 hours and the numbers were evenly split at 10 for vaccinated and unvaccinated patients (one of the 21 people admitted had their first shot more than seven days ago).

To help put those numbers into perspective, the province clarified that the risk of hospitalization is much higher for unvaccinated people.

Vinh, who regularly analyzes COVID-19 data, says the number of vaccinated people admitted to hospital tells him that “we’re not doing enough to protect them.”

“They should be interpreting that as this is a sign of community failure,” he said. “You could say, well, if I'm vaccinated, I can still get infected and transmit to others. Yes, that's true, but your contagious period is shorter and then by making it shorter, you actually mitigate community transmission. You prevent the virus from being able to spread for as long as you would normally do if you were unvaccinated.

I hope that we are using these unfortunate hospitalizations to spur us on and say, ‘You know what, let's roll up our sleeves. Let's do what's best for our entire community by protecting the most vulnerable.’”

The Q4 2022 earnings reports from Canada's big banks are showing signs that the Canadian economy is slowing down ahead of a potential recession, with some signs of optimism.

Hockey Canada says there were more than 900 documented or alleged incidents of on-ice discrimination across all levels and age groups during the 2021-22 season.

U.S. prosecutors on Thursday asked a judge to dismiss bank fraud and other charges against Meng Wanzhou, the chief financial officer of China's Huawei Technologies whose 2018 arrest strained relations between the U.S. and China.

The unemployment rate in Canada declined slightly to 5.1 per cent in November, according to new data released by Statistics Canada Friday.