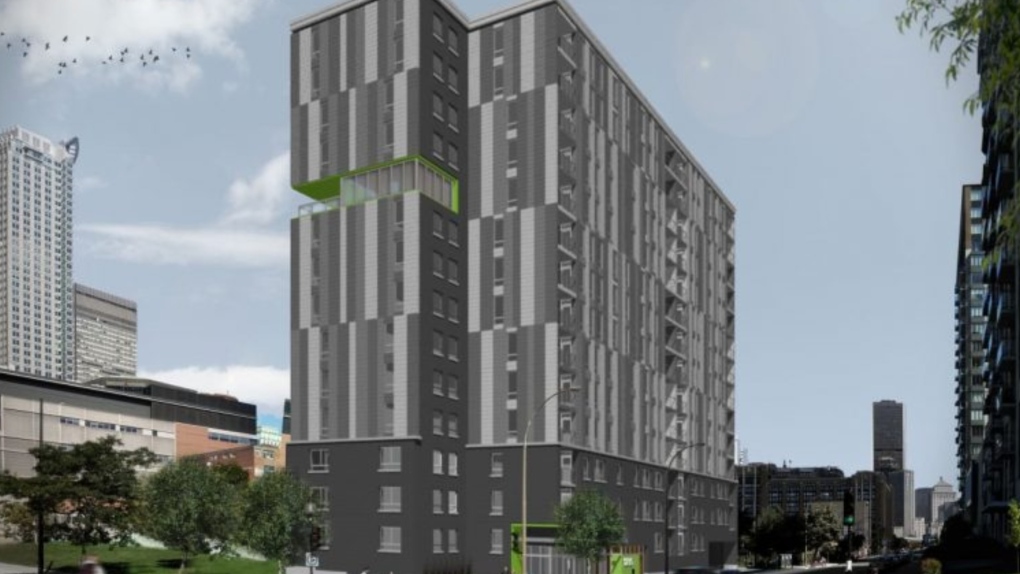 Coop la Montagne verte is expected to be completed by 2021.

MONTREAL -- Montreal is investing into social housing in the downtown core.

Mayor Valerie Plante announced Thursday that the city's executive committee has approved an exceptional $4 million grant on the project, which will be built at the northeast corner of St-Jacques and de la Montagne Streets, south of the Bell Centre.

The largest coop in the city, Coop la Montagne verte will consist of 136 social housing units for individuals and families, including some units with as many as four bedrooms.

"Supporting accessible, affordable and quality housing development projects in Montreal is one of our priorities," said Plante, adding that it "responds to a real demand for social housing in the city centre."

The $4 million will cover initial costs to make the project viable, explained Executive Committee Member Robert Beaudry, adding that in total, the city will invest $19 million.

Plante said the coop "will allow 66 families to have access to comfortable accommodation while respecting their budget and will contribute to improving their quality of life."

Rental vacancy rates are currently at 1.5 per cent, the lowest rate since 2004.

The Montagne verte housing project is expected to be completed by 2021.

The project isn't an immediate solution to the mounting housing crisis. Still, it's a step in the right direction, said tenants' rights advocate Maxime Roy-Allard of Quebec's coalition of housing committees (RCLALQ).

"There are two fronts that we need to fight on. One, build more social housing units. On the other side, we need to implement more rent control," Roy-Allard said.

That's no surprise, said Hans Brouillette of the Quebec Landlord Association. With a booming economy, people want to live downtown, and there aren't enough apartments available.

"The government and the cities have to put incentives to make sure new apartments are being built, first, and second, also to keep existing rental apartment buildings on the rental market," he said.

Brouillette said the best way to do that is to do away with regulations like social housing quotas and rent controls.

"The criteria for the fixing of rent needs to be revised," he said. "Currently, it's lower than the rate of inflation, so this leads landlords to the decision of not renting anymore because the income generated is not high enough to cover the expenses."

"The actual problem isn't that the cost of rents is too low; it's that the price of housing is going up too quickly. We need to fight to curb this. We need to fight speculation and to stop this increase of 10 per cent every year of duplexes and triplexes in Montreal," he said.

On that, Plante said she is discussing different options with the province, including a potential foreign buyers' tax, but added that her main priority remains massive investment in social housing.