MONTREAL -- In the 48 hours after his congregation installed an oversized, illuminated Hanukkah menorah at a busy intersection in Ste-Agathe last Friday, Rabbi Emanuel Carlebach discovered it had twice been unplugged, its light extinguished.

An employee of House of Israel synagogue went to reconnect the menorah each time, and all was well – until Sunday morning.

Driving by and noticing its glow had dimmed once more, Rabbi Carlebach discovered this time the power cord had been cut.

“In my opinion this is an act of targeted vandalism,” Rabbi Carlebach told CTV News. “Our relationship with the city administration, many businesses and residents is good. I have been installing menorahs on ski hills, storefronts and public areas for 30 years and this is the first time we’ve had such an incident, Carlebach said.

The Rabbi filed a police report at the local detachment of the Surete du Quebec in Ste-Agathe the same day. SQ spokesperson Marc Tessier confirmed police are investigating, but there are no suspects.

House of Israel synagogue was established in Ste-Agathe in 1953. Fifty per cent of the Laurentian’s Jewish community are members, according to the synagogue’s website.

As on past holidays, the congregation obtained permission from the town of Ste-Agathe to install the large Hanukkah menorah at the corner of Highway 117 and de la Montagne Road. 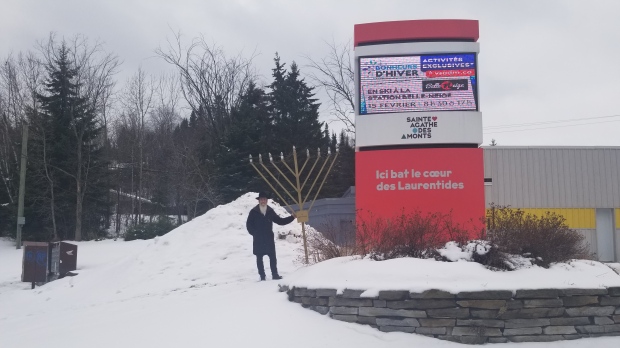 “The menorah is displayed in public because the message is about freedom for all mankind…to be as bright as you can be,” Rabbi Carlebach said, adding “I’m praying this is not an act of anti-Semitism.”

The synagogue’s leader said he chose to speak out about the incident because perhaps his community has to do more to reach out to others, and vice versa.

“Maybe we are a mystery to them, so utilize your time to discover who we are versus going out and vandalizing something that means so much to someone else.”