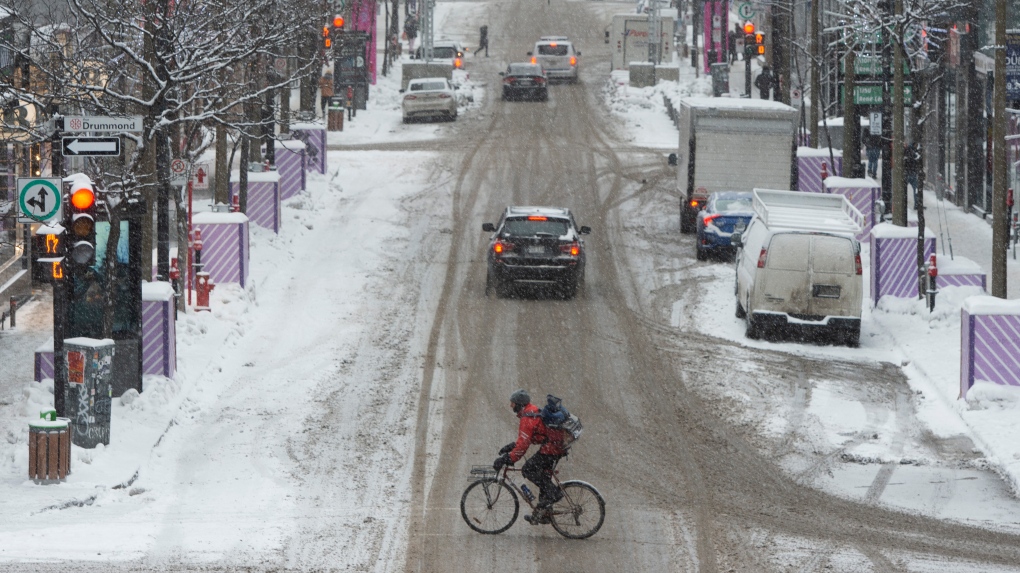 A few people make their way through downtown as COVID-19 restrictions continue, Thursday, January 21, 2021 in Montreal. THE CANADIAN PRESS/Ryan Remiorz

MONTREAL -- Quebec reported Saturday that 1,685 more people have tested positive for COVID-19 in the past 24 hours bringing the total number of confirmed cases to 252,176 since the start of the pandemic.

The number is above the seven-day average for daily increases which is now 1,601 new cases per day. The Quebec Institute of Public Health is reporting 17,488 active cases in the province.

Of the total number of confirmed cases, the province reports that 225,245 people have recovered from the disease, an increase of 1,878 from Friday.

The drop in case numbers comes after the Quebec government implemented an 8 p.m. curfew province-wide on Jan. 9.

Premier Francois Legault attributed the decline to the curfew, but has said hospitals are too full to lift the new restrictions as scheduled on Feb. 8.

On Saturday, Legault released a message on his Facebook page in which he said he recognized that Quebecers were frustrated with the restrictions, but called for empathy for essential workers, who he said are bearing the brunt of much of people's frustration.

"This is normal, given all the upheaval we're going through," Legault said. "People are more impatient. At times, we have a bit of a short fuse."

The province added 76 more deaths due to the disease including 17 that occurred in the past 24 hours, 33 that occurred between Jan. 16 and Jan. 21, 24 before Jan. 16, and two deaths that occurred at an unknown date.

The total number of people who have died in Quebec due to the novel coronavirus is now 9,437.

The number of people receiving treatment in the province's hospitals decreased by 43 Saturday and the total number of hospitalizations is now 1,383. Of those, 216 people are in the intensive care ward, an increase of four from Friday.

It is the fourth day in a row that Quebec has reported a decrease in hospitalizations.

The premier added that there were encouraging signs that the situation in the province would improve soon, noting that Quebec finished vaccinating people living in long-term care homes this week, as well as 130,000 health-care workers.

The Quebec government expects hospitalizations and case numbers to drop over the course of the next few weeks, Legault said.

"There is hope on the horizon," he said.

Health-care professionals analyzed 38,231 samples on Jan. 21. (Quebec releases its testing data from two days prior to its daily updates).

The Island of Montreal surpassed 90,000 confirmed COVID-19 cases Saturday when it reported 669 new cases bringing its total to 90,276. The island also reported 38 more deaths bringing that total to 4,220 since the start of the pandemic.

Quebec reported that it administered 9,715 vaccinations Friday for a total of 210,252 vaccinations since the campaign began.

In total, 2.46 per cent of the population has been vaccinated, and health-care professionals administered an average of 10,342 vaccines per day for the past week.

-- with reporting from The Canadian Press.