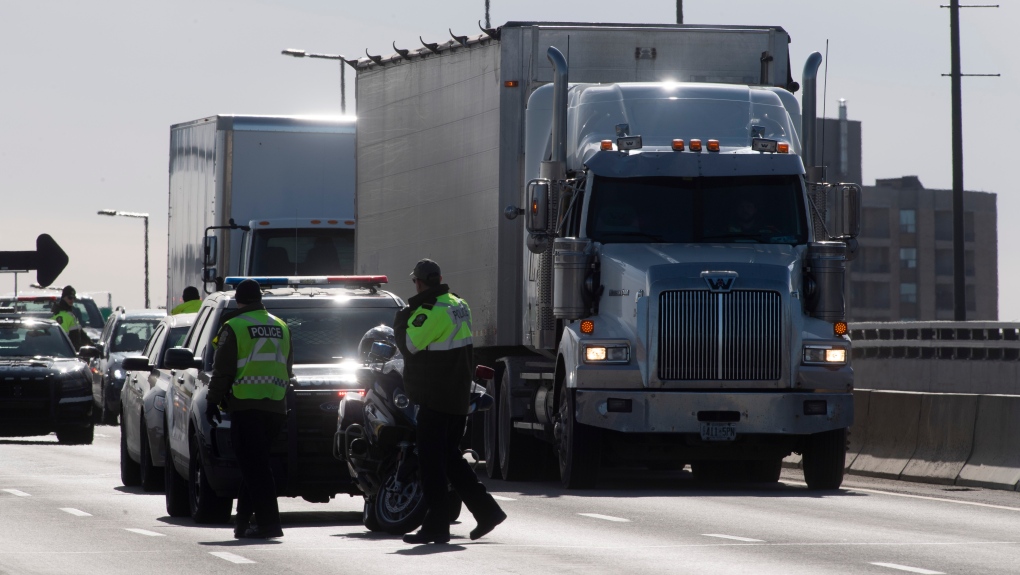 Quebec Premier Francois Legault says he is optimistic an agreement can be reached to allow Quebecers living near the border with New Brunswick to cross into the Maritime province. Trucks roll through a checkpoint as Quebec Provincial Police stop traffic heading into the province on an inter-provincial bridge, in Gatineau, Que., Thursday, April 2, 2020. THE CANADIAN PRESS/Adrian Wyld

MONTREAL -- The Surete du Quebec (SQ) is stepping up its presence on Québec's roads and bodies of waters as the construction holidays begin for thousands of Quebecers.

No less than 2,000 statements of offence were handed out on Friday during the day, specifically for speeding, as well as using electronic device when driving.

"You should know that one-third of Quebecers take time off during this period, which considerably increases travel on roads. There are, therefore, more people on the roads, and some may be more likely to drive faster, '' said SQ spokesperson Valérie Beauchamp.

Traffic could be even worse this year on Quebec roads due to the temporary US border closure due to the COVID-19 pandemic. It would, therefore, not be surprising to see more vacationers take the opportunity to visit different places in the province.

"The construction vacation period represents the time of year when the number of accidents causing fatalities or injuries is highest. There were only 69 collisions reported yesterday (Friday), but fortunately no fatal collisions have occurred," said Beauchamp.

However, the statistics show a darker picture during the summer holidays. In 2019, 15 people lost their lives in accidents on the roads patrolled by the SQ during the two-week construction holiday.

This year, various police operations are planned until Aug. 2, not only on the road network, but also the bodies of water and the trails the SQ monitors.

"We invite vacationers to safely practice their recreational activities. For example, wearing a helmet is compulsory for ATV enthusiasts. We will also strongly recommend wearing a personal flotation device at all times when going out on a boat, but also near bodies of water," said the SQ spokesperson.

Multiple heat waves have already prompted many Quebecers hit the water, where unfortunately several people have lost their lives.

As of July 17, the Lifesaving Society recorded 48 drownings in 2020, compared to 35 drownings at the same time last year.

This report by The Canadian Press was first published July 18, 2020.