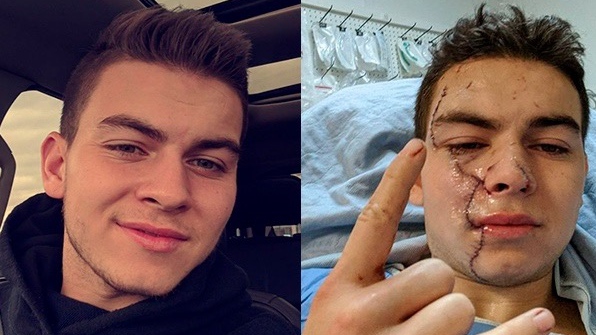 Anthony Seyer got into a brutal fight at Le Shaker bar that left him permanently disfigured when he said two men tried to make sexual advances towards his 18-year-old sister. SOURCE gofundme

MONTREAL -- No charges will ultimately be brought against the man in his 30s who 21-year-old Anthony Seyer says beat him up to the point of disfigurement at le Shaker bistro in Saint-Hyacinthe, in Montérégie, on the night of December 7 to 8.

Crown prosecutors met Seyer Friday and they are said to have told him that they were not moving forward with the file because there was not enough evidence, among other things, despite video recordings of the alleged assault.

On the evening in question, Seyer said he exploded when defending his 18-year-old sister. Seyer said he saw the man grab her breast.

Seyer said the fight escalated considerably when the suspect hit him in the face with a glass, which broke, and he then took the shard of glass and cut Seyer's cheek open.

Seyer was transported to hospital and suffered head trauma, a concussion and major cuts.

Seyer shared the fact about no charges being pursued against his attacker on his Facebook page Friday afternoon. He did not mince words in deploring the Quebec judicial system. The video he posted was shared more than 1,000 times in two hours.

"My eyebrow is paralyzed, I am disfigured. It's a centimeter [from my eye], I could have been blinded, but it's not enough! I'm supposed to be pretty much dead right now. I am angry! [...] From the start, I was still positive towards everything but there ... it's disgusting," he wrote.

Seyer required many stitches to have his face reconstructed following the violent attack and is now disfigured.

Saint-Hyacinthe Bloc Quebecois MP Simon-Pierre Savard-Tremblay presented Seyer with a plaque of bravery in January with the words "Hommage au courage" for defending his sister at the bar.

Le Shaker set up a gofundme for Seyer and deplored the event and praised Seyer for his actions in a Facebook post after the attack.

"As owners of the establishment in which this incident took place, we would like to highlight Anthony's courage in opposition to his attackers," the post reads.