Opinion: Aiming for a COVID-19-free summer in Quebec, but is it possible? 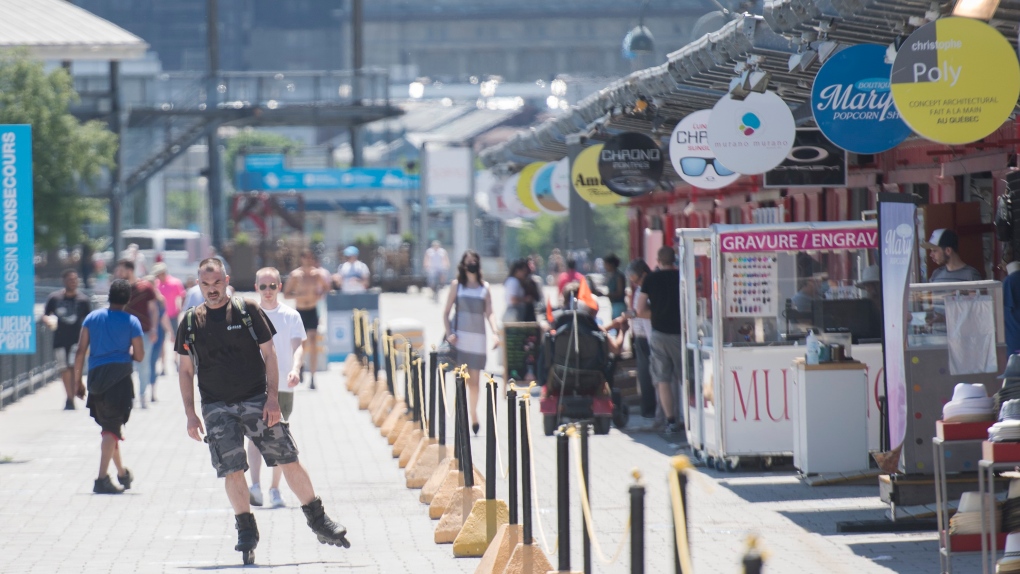 A man roller blades in the Old Port of Montreal, Saturday, June 20, 2020, as the port launches its 2020 summer season. The COVID-19 pandemic continues in Canada and around the world. (THE CANADIAN PRESS/Graham Hughes)

MONTREAL -- With summer approaching and vaccinations well underway, it would seem we are finally reaching the end of the long pandemic tunnel.

Quebec Premier Francois Legault promised that by June 24, all residents will have access to a first jab of the vaccine and then we should then be off to a wonderful summer, "if we all behave well."

But overreliance on the vaccine as the only solution to the pandemic should be avoided. Several factors cast uncertainty into what the following months will bring.

First of all, this virus has never played by our rules and is not necessarily done with us. With constantly emerging variant strains, the latest one from India, it keeps throwing curveballs at us. A breakthrough variant strain resistant to antibodies remains a concern and could turn the coronavirus clock back to a time we would much rather forget.

Also, we will not have reached herd immunity by summer: children will not be vaccinated in addition to those who refuse the vaccine, meaning the virus will continue to spread.

So will we have relief from pandemic restrictions in time for summer? Although hospitalizations and ICU numbers are down for now, other indicators do not show we are moving in the right direction.

Outbreaks in Montreal schools continue to climb, including those with the more transmittable variants. Workplace outbreaks remain high and are not dropping significantly. If this trend continues with the additional uncertainty over breakthrough variants, the harsh reality is that Quebecers already exhausted from over a year of severe restrictions may face more weeks or even months of restriction and confinement.

What should be done to save our summer? It's not that complicated.

At the federal level, travel restrictions take precedence to prevent the entry of new variants. More close to home, Legault's government should learn from its past mistakes and follow the example of countries such as New Zealand, the poster child for how to deal with COVID-19 and successfully suppress the virus to an astonishing level. To no surprise, life there is continuing relatively as normal with few restrictions except for international travel.

The main focus for the weeks before summer is deceptively simple and can be summed in two words: indoor ventilation.

Legault, Health Minister Christian Dube and Education Minister Jean-Francois Roberge and their public health "experts" have consistently denied, without any evidence to support their position, the major role that poor indoor ventilation (or air quality) plays in COVID-19 transmission, casually sweeping aside the abundance of scientific evidence on the importance of proper ventilation and air filtration in schools and in other enclosed indoor spaces in preventing airborne virus spread.

It is now well established that the COVID-19 virus is present in microscopic aerosols which can remain suspended in the air for hours and be carried over long distances, much greater than two metres.

According to a new study just published by the Massachusetts Institute of Technology, people who maintain 60 feet of distance from others indoors are no safer than if they socially distanced by just six feet. Another watershed study just published in the prestigious medical journal The Lancet concluded that the airborne (indoor) route is likely to be the dominant path of transmission, rather than through proximity (less than six feet) by respiratory droplets.

In simple terms, if we care about having a normal summer, the indoor ventilation problem needs to be tackled urgently, especially in high-risk sectors such as schools and the workplace. It is time for our politicians to listen to the scientists. To the real ones.

New Zealand chose the path of suppressing the virus entirely to reach objective zero virus through consistent and well-targeted no-nonsense hardball policies. By contrast, Quebec chose an untested and unproven mitigation strategy that would allow a controlled outbreak to occur, intending to theoretically prevent significant overloads on healthcare systems. What resulted was a combination of ineffective, incoherent, poorly targeted approaches mostly driven by political considerations while ignoring the major sources of transmission such as the schools and some workplace environments. What also resulted from this failed Quebec strategy was a staggering 1,294 deaths per million compared to 5.3 deaths per million for New Zealand from the start of the pandemic.

To create conditions to reduce case numbers to levels low enough (daily cases in the low hundreds) to allow a return to normalcy by the summer, vaccinations will not be enough. Quebec must abandon its failed strategy of mitigation and shift to one of suppression.

Inadequate indoor ventilation in schools and the workplace remain the fundamental issue to be addressed immediately. A return to more restrictive measures in enclosed places for a period of four to six weeks must be a priority, although the value of a strict curfew is debatable, particularly regarding outdoor activities.

Poor school air quality and climbing outbreaks remain very concerning and it is now time to recognize the necessity of closing schools until the end of the school year.

It's basically pay now or pay later. It's better to pay now and the sooner the better. The cost of paying later may be much more painful. Let the children have their summer.

The good news is that the goal is achievable if our politicians will listen and do the courageous thing. If we succeed in bringing the cases down to very low numbers by the end of June, we will finally be able to enjoy a well-deserved summer that we've been waiting for far too long.