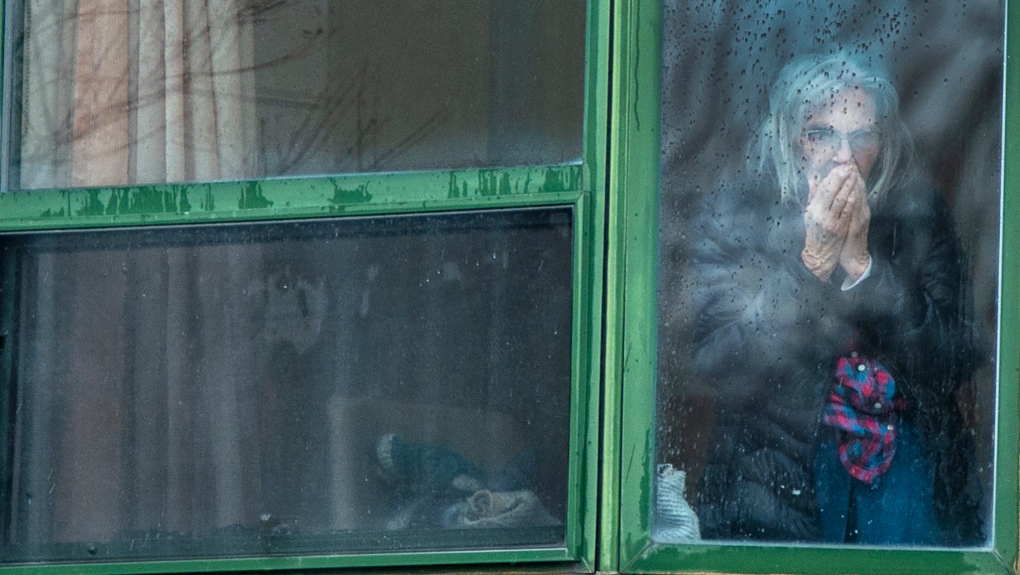 A resident looks out her window from the Herron seniors residence Monday April 13, 2020 in Dorval near Montreal's Trudeau airport. Thirty -one residents are confirmed to have died in the past month.THE CANADIAN PRESS/Ryan Remiorz

MONTREAL -- We may talk less about it, but suicide exists among people 65 and over, and with the upheavals caused by the COVID-19 pandemic, their suicidal thoughts have increased, a public health psychiatrist warns.

Psychiatrist and preventive medicine expert at Montreal Public Health Dr. Robert Perreault is calling for vigilance with loved ones, as he says those thoughts often remain hidden.

"We have to talk about it," he said during suicide prevention week.

While fewer Quebecers over 65 take their own lives than those in the 45 to 64 age group - which has the highest rate - they sadly do so more often.

Six in 10 suicides are in people over the age of 65, according to data from the coroner's offices, said Perreault.

The rate of "serious" suicidal ideation went from 1 per cent to 4 per cent among Quebecers aged 65 and over from Sept. to Nov., which Perreault calls a significant figure.

Since the start of the COVID-19 crisis, older people have been much more isolated, he said. They have much less human contact, some have been confined to their CHSLD rooms for long months, their physical health has deteriorated, they know they are at greater risk of dying from COVID-19, and while the youngest manage to keep some semblance of social life with the internet, not all older people have mastered new technologies.

The pandemic and containment "took away their protections."

Those who are still at home have been hit harder than those who live in retirement homes, where the staff keep an eye on them. There is no study on the subject, he said, but this is what social workers in the field report.

Also, seniors who fear being seen as a burden by their family may be reluctant to talk about depression or suicidal thoughts, so as not to scare them and keep them further away.

During suicide prevention week, Perreault hopes that the relatives of lonely seniors do not forget them, and intensify contact with them to break the isolation, which can be a source of distress. It may also help them see the signs of depression because they are not necessarily easy to recognize, he warns.

In older people, depression does not show the same signs as in younger people, such as great sadness and loss of desire to do anything.

Rather, it manifests itself in strange pains, difficult sleep, more confusion or irritability, signs that are sometimes akin to senility, explained Perreault.

"We don't necessarily think of a depressive state and therefore we don't always think of treating it, and that's where it can progress," he said.

As in all age groups, depression and mental illness, in general, are among the predisposing factors to suicide, the Quebec Association for Suicide Prevention indicates in an online guide.