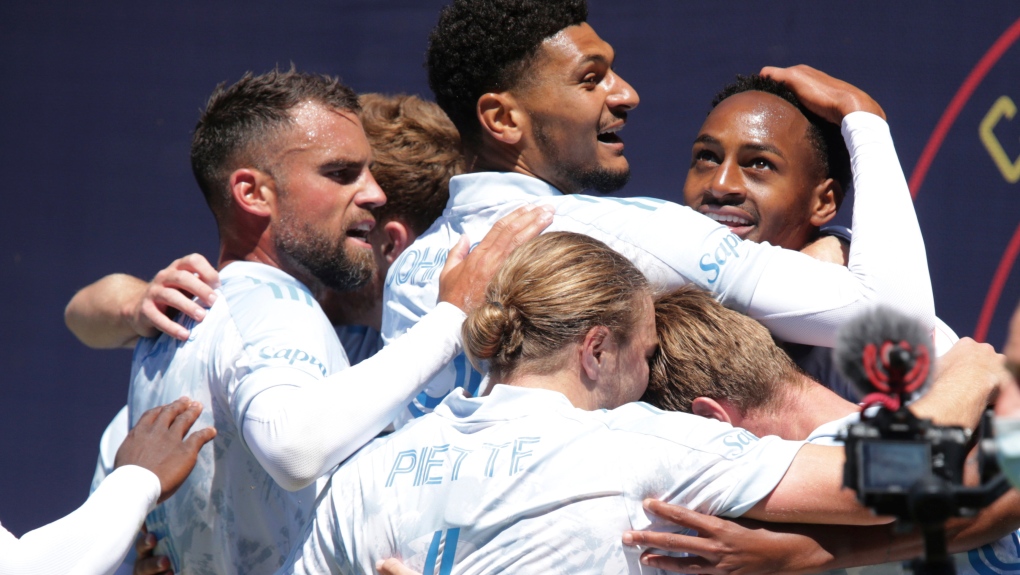 CF Montreal teammates celebrate with forward Mason Toye, right, after he scored during the second half of an MLS soccer match against the Chicago Fire Saturday, May 29, 2021, in Chicago. (AP Photo/Eileen T. Meslar)
MONTREAL -

CF Montreal will play home games in Harrison, N.J., and Orlando next month.

The MLS club says it will face Inter Miami CF at Red Bull Arena in Harrison on July 3 and will host New York City FC at Exploria Stadium in Orlando on July 7.

Montreal has been playing home games in Fort Lauderdale, Fla., this year, but the stadium is unavailable for the two games in July because of the Gold Cup.

Red Bull Arena served as Montreal's home field for the majority of last season after the start of the COVID-19 pandemic.

Exploria Stadium has been Toronto FC's home field this year.

The club says the venues are subject to change if the team is allowed to return to Montreal. The team says it is working with MLS, Toronto FC and the Vancouver Whitecaps, who are currently based in Utah, to find a solution to return to Canada.

Canada recession: It's coming, RBC predicts, but how long will the downturn last?

Canada is headed towards a moderate recession, but the economic contraction is expected to be short-lived compared to previous recessions, economists with Royal Bank of Canada predict.

The Commissioner of Canada Elections' office says it has received and is reviewing information related to the allegations raised by the Conservative Party of Canada that now-disqualified leadership contender Patrick Brown's campaign violated federal election financing rules.