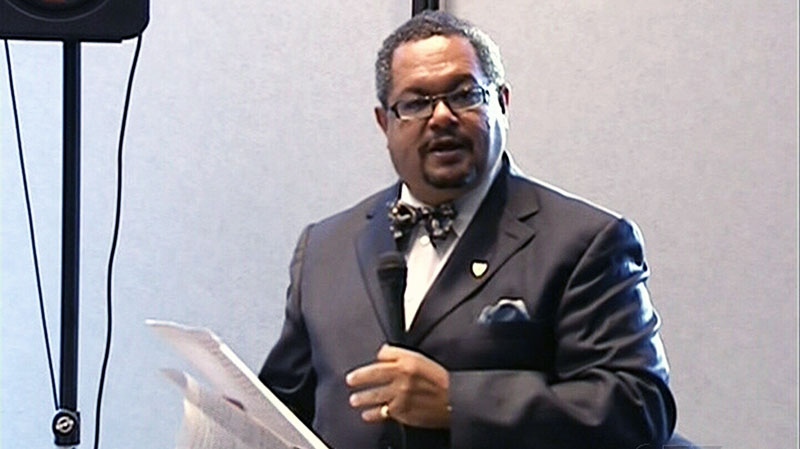 NASSAU, Bahamas--Arthur Porter, the former head of Canada's spy watchdog, says he has late, stage-four cancer and is too ill to travel from the Bahamas to Canada to face investigators over allegations of fraud in one of the country's priciest infrastructure projects.

Porter said if Canadian investigators want to question him they should fly to the Bahamas.

"I don't want them to think I would chicken out on anything," he told The Associated Press during an interview in his home in an upscale, gated community. "So if they want to come here, absolutely no problem."

Appearing sickly and thinner than he once did, Porter, 56, said he is undergoing a second round of chemotherapy for lung cancer that has spread to his liver. During the interview, he coughed repeatedly and breathed with assistance from an oxygen tank beside his leather chair.

He said he would discuss with his lawyer whether to fight extradition to Canada once he has been formally served. Porter denies any wrongdoing.

Quebec's anti-corruption squad has issued an arrest warrant for the doctor. Porter is one of several people facing fraud-related charges stemming from the construction of the $1.3-billion McGill University Health Centre in Montreal, one of Canada's biggest infrastructure projects.

In the Bahamas, Porter is managing director of a private cancer treatment centre in the islands' capital of Nassau. He has made the wealthy community of Old Fort Bay his permanent residence since moving to the archipelago off the eastern coast of Florida in 2011. Three Mercedes stood in his driveway Thursday.

Another suspect in the Canadian case, Jeremy Morris, is the administrator of a Bahamas-based investment company. Porter said he has never heard of Morris.

In Canada, the federal government has taken flak for its decision to appoint Porter to a role where he would have had access to sensitive security information.

Porter had already had a controversial stint as a hospital administrator in Detroit before arriving in Canada. Eventually, he quit his job at Canada's security-intelligence panel and left the country, following reports in 2011 of questionable ties to an international security consultant.

On Thursday, Porter said he is a citizen of the West African nation of Sierra Leone and travels with a Sierra Leone passport. A Sierra Leone flag hung from a landing in his home. He made references to "other roles in other governments," including work with Sierra Leone.

In recent years, Porter had also been working with the government of Antigua and Barbuda to build a cancer treatment centre in that eastern Caribbean nation.

Prime Minister Stephen Harper said the Montreal criminal case has nothing to do with the work Porter did for the Government of Canada when he was head of the Security Intelligence Review Committee.

"It's a matter that's ultimately going to be before the courts," Harper said Thursday when asked for a reaction to the charges during a visit to Riviere-du-Loup, Que.

"I'd just point out that none of these matters relate to his work in his former federal responsibilities."

Elbaz appeared briefly in court in Montreal on Thursday to be formally charged with fraud. He was freed on $100,000 bail, awaiting his criminal case.

Elbaz was Porter's right-hand man and served as the director of redevelopment, planning and real estate management for the hospital.

Under his bail conditions, Elbaz is not permitted to speak to a long list of people -- including his co-accused, as well as a lengthy list of SNC-Lavalin and McGill University Health Centre employees who could be witnesses.

He is also forbidden from going to either the building that houses the offices of the multinational engineering firm or to those of the McGill hospital administration. He has also been ordered to hand over his passport, he cannot leave Canada, and he must report to Quebec provincial police headquarters every Friday.

--with files from The Canadian Press.