The young woman was found in a parked vehicle with serious injuries to her upper body. She was transported to hospital and was pronounced dead early Monday morning.

Another victim, a 21-year-old male, also sustained major wounds to his upper body. He was found by police a block away on De Come street after attempting to flee the attack on foot.

He was also brought to hospital and is in stable condition.

The young woman was in a parked car talking to the other victim, who was with a small group of pedestrians, when they came under fire from a passing vehicle, police said.

“It’s sad,” said a passerby who said he lived in the area. “Because I have two daughters and I’m lucky everything goes right for them.” 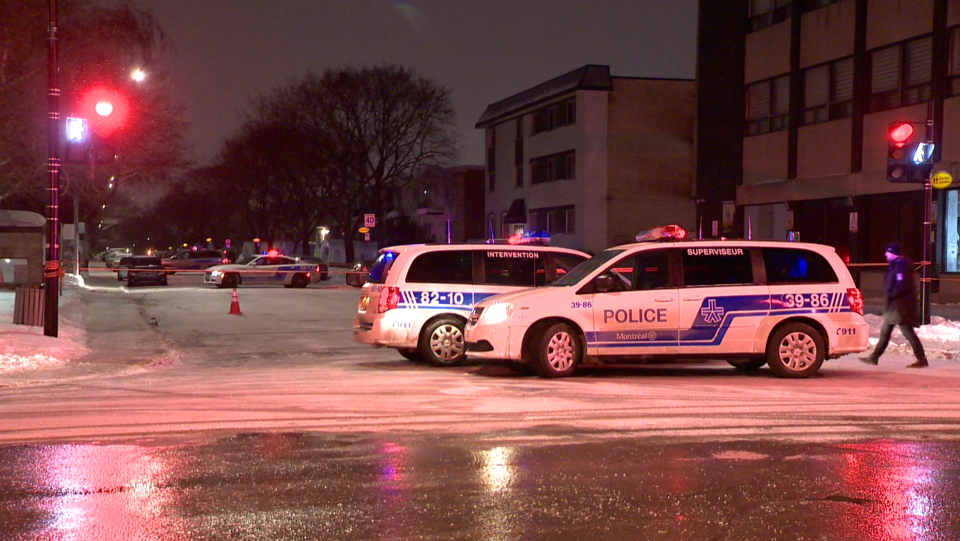 Montreal police vehicles on the scene of a Sunday evening drive-by shooting that claimed the life of a 15-year-old girl on Monday, Feb. 8, 2021. (Cosmo Santamaria, CTV News)

Police say there are at least two suspects who fled the scene in a van, driving west on Jean Talon, but no one has been arrested.

The two suspects were wearing masks, which has made them difficult to identify, police said. They said it's too early to say if the attack seems linked to organized crime.

The Major Crimes division and the crime scene technician are investigating what has become the fifth homicide in Montreal this year.

On Monday morning, half a dozen police cars could be seen around a blocked-off parking lot and a small stretch of road just south of Jean-Talon Street as technicians worked to analyze the scene.

In the afternoon, police towed a pale or white sedan that they said was the one the girl was sitting in when she died.

A block away, for some time, a police car idled in front of a two-storey brick home cordoned off with orange tape, within view of a busy elementary school playground.

Borough Mayor Michel Bissonnet offered his condolences on Monday evening, and called for a greater police presence in the area.

"We are asking the SPVM to conduct a rigorous investigation and to deploy the necessary personnel to find the culprit(s) of this tragedy," he said in a statement.

"The shooting [on Sunday] night, combined with the violent events that have occurred in recent weeks in the northeast of Montreal, lead us to believe that additional measures must be taken to strengthen the sense of security of our fellow citizens, in particular by the presence of a greater number of police officers on the ground."

According to the borough, police will be going door-to-door on Tuesday evening to speak with residents living near the scene of the shooting, "to reassure them and to gather information."

Other neighbours expressed their shock over the crime in what they described as a normally peaceful area.

"We were sorry to hear about the loss of a young girl, perhaps a student, with her future before her," neighbour Ali Hellal said.

He said he has lived in the area for more than 10 years and this was the first time he'd heard of a violent crime nearby.

Another neighbour, Danny Cimino, said the area has been very quiet lately, especially with COVID-19 restrictions in place.

"I'm very shocked that a 15-year-old girl got shot right here when nothing ever happens," he said.