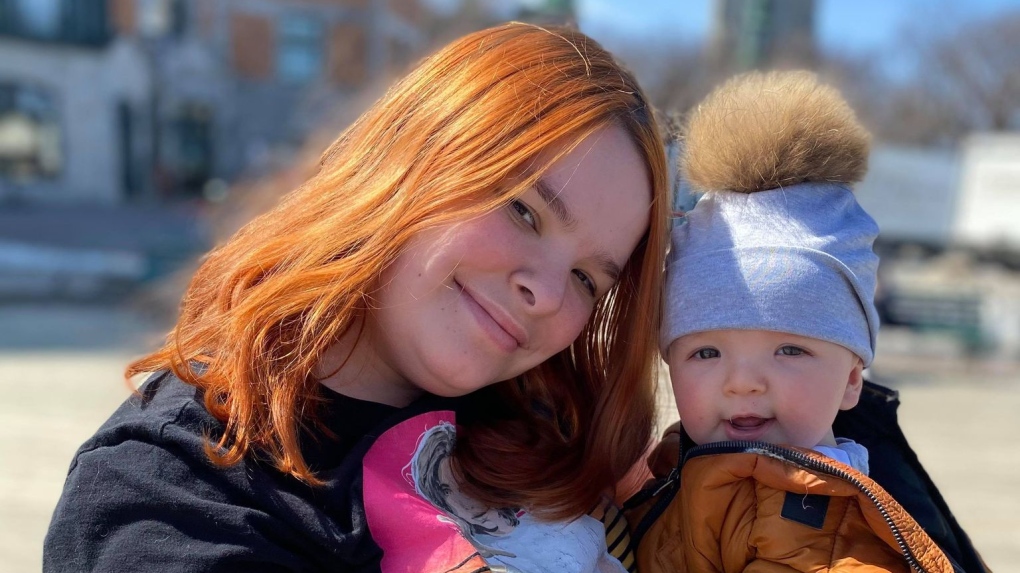 Jessyka Parrot with her seven-month-old son, Logan, who contracted COVID-19.

MONTREAL -- A Quebec mother is reeling after her seven-month-old son was rushed to hospital after contracting COVID-19.

Last Sunday, she received the call confirming they both had COVID-19.

Logan's health began to deteriorate -- "catastrophically," according to the Beauport-area mother.

"He had a 40 degree (Celsius) fever, even with medication. Nothing was helping," she recalls. "When I put him to bed, he was making funny noises and was having a hard time breathing."

Parrot called 911 -- because the family already had several positive COVID-19 diagnoses, they could not drive in themselves.

The infant was admitted to the ICU at the Centre hospitalier de l'Université Laval (CHUL).

"I've never seen my baby so vulnerable, to see him suffer. He didn't stop crying the entire time because he was in pain," Parrot said. "I felt so bad. I didn't know what to do to help him."

Parrot notes, in addition to take care of her boy, the doctors and nurses worked hard to reassure her that Logan would be alright.

"His heart rate was 214 at one point. They put him on a monitor and took a scan of his lungs," she said. "They could see signs of pneumonia starting, but because they caught it early, they were able to attack it quickly."

Parrot says she doesn't know where her son caught the virus.

"Since he was born, we haven't had contact with anyone because I've been trying so hard to be careful," Parrot said. "He's just a little baby, so the least amount of people possible have seen him."

Parrot notes her mother was the first to test positive, followed by herself, Logan and then her step-father, who all live under the same roof.

"We don't know where it came from. It could have been at work, the bus, the grocery store," she said. "We're not looking to blame anyone because there's no point. It was just bad luck."

"I gave him 100 per cent of myself," she stated. "He is more important than me. Even if I was tired, my head hurt or I just wanted to rest, I had to take care of him and I said, 'I'll take care of myself after.' It was hard, but he's my priority."

The family is slowly recovering. However, they are still experiencing some of the symptoms of the virus. Parrot's mother, Geneviève, says she still cannot smell or taste anything.

"People have no idea what we've lived through," she said. "To see a small baby who can't defend himself, we didn't know how it was going to affect him."

Parrot notes the hardest part is because Logan is so young, he cannot communicate his pain.

"He can't say his head hurt or his throat hurt," she said. "It was painful, but we made it through and now I'm seeing my happy, playful baby come back."

The family has one message for all Quebecers: This virus is real.

"You have to respect the health measures to protect everyone," said Geneviève Parrot. "We thought we were invincible because we've been so careful, and we still got it."

The family is in isolation for at least another ten days.

"Logan is a champion. He's my hero. He beat COVID without too many complications," Parrot said.