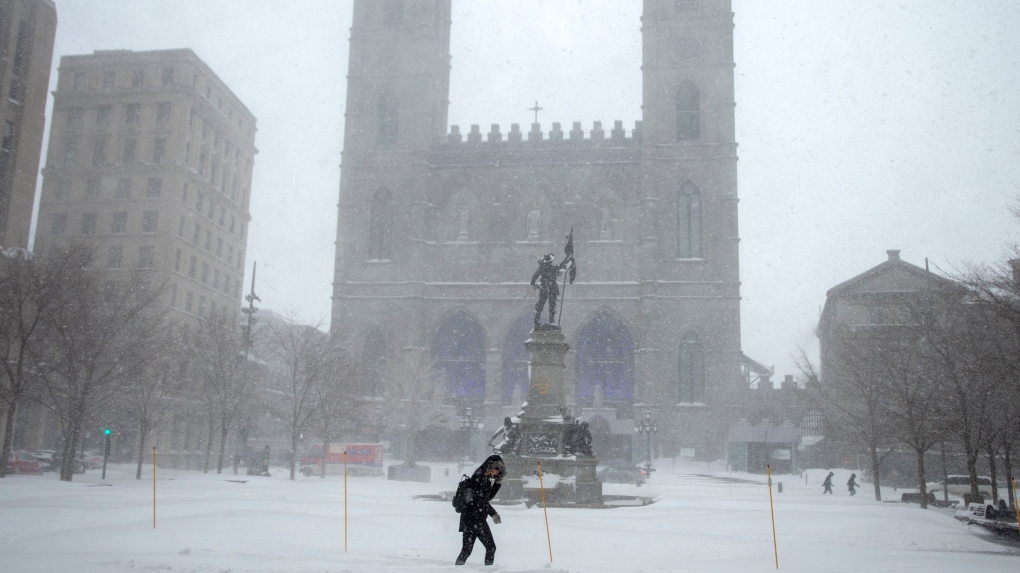 A pedestrian walks past Notre Dame Basilica during a snowstorm, Friday, February 7, 2020 in Montreal. THE CANADIAN PRESS/Ryan Remiorz

MONTREAL -- Quebecers who intend to storm the slopes to overcome the monotony of confinement may be delighted to hear that winter will likely be mild and snowy.

But warmer temperatures -- ocasionally causing slush and other cocktails of weather -- could also make life difficult for winter sports enthusiasts, according to MeteoMedia.

A mild winter with temperatures above seasonal norms seems to be on the horizon for the eastern part of the country -- but precipitation could be abundant.

According to MeteoMedia forecasts, "the cold air present in the centre and west of the country will facilitate the development of weather systems that will bring a wide variety of precipitation: snow, rain, sleet, freezing rain."

In December, temperatures should be near normal, but the months of January and February could be particularly mild, with little or no cold snap, according to the weather network.

As for the chances of having a white Christmas in southern Quebec and Ontario, André Monette, meteorology service manager at MeteoMedia wouldn't say, specifying "that it will take, unfortunately, until the last days before the holidays to have a more precise portrait."

"The problem with warm weather is that it's difficult to have a stable snow cover, we will have snow, but it can melt quickly,'' said Monette in an interview with The Canadian Press.

"There will be grey weather in general, in southern Quebec and Ontario, so fewer sunny days than normal," he added.

This report by The Canadian Press was first published Nov. 30, 2020.