The green line on the Montreal metro was out of service from 5:45 a.m. until 8:30 a.m. between the Lionel-Groulx and Viau stations.

The first trains start rolling in the metro system at 5:30 a.m. but came to a halt just 15 minutes later for what the STM described as "an electrical problem."

Later in the morning the STM said a defective power cable was the cause, and it would investigate further to find out what went wrong.

At 6:45 a.m. people were lined up several hundred deep at special bus stops, waiting for a bus to take them to their destination.

Around 8:30 a.m., nearly three hours after the trains stopped running, the metro resumed service at the affected stations.

During the morning many media reports about the stoppage were wrong, and the STM apologized for giving out conflicting information.

While messages announced inside the metro system and on the company's twitter account were correct, public relations personnel were telling reporters at certain media companies a different story.

As a result several radio stations, and at least one newspaper and one French-language TV station delivered incorrect reports about where service was stopped. 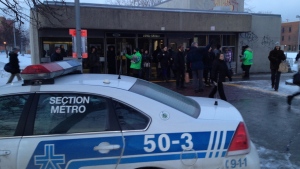