MEGA+MIGS hopes to be a global destination for gamers

MONTREAL -- Some 10,000 visitors, gamers, and industry insiders, are expected at the MEGA + MIGS festival, which took off Saturday and runs until Tuesday at the Grand Quai du Port in Montreal.

Mega+@MIGS__ 2019 starts tomorrow!!!
Get your thumbs ready! Call your friends! But above all, check out the list of exhibitors and activities offered so you won't miss anything! To speed up your entry, buy your tickets in advance at https://t.co/LKgtOXV3KZ pic.twitter.com/7soNqXJsgl

The festival is a major first since the MEGA + MIGS was born from the fusion of these two very popular events in the field. The objective of the union is to make the event in Quebec a must on the world stage, said a spokesman for the event Jean-Martin Aussant, General Manager of Coop La Guilde.

"In fact it is the union of two events that already existed, the MEGA and the MIGS. Historically, the MEGA is the public event organized by Coop La Guilde. MIGS is more for industry professionals and is organized by the Digital Alliance," he said. "This year, we're doing both together at the same time, making it by far the biggest video game festival in Canada. It's really going to be an event of a magnitude never seen in Montreal for video games."

According to Aussant, Montreal is already the third industry hub in the world, after Japan and California. He also points out that the video game industry is keeping thousands of workers alive in Quebec in an industry that is only set to grow more.

"In my opinion, the video game industry is at the dawn of its development with multiple applications that we do not yet suspect, but that we are developing at this time," says Aussant.

MEGA + MIGS kicks off for families this weekend and for video game enthusiasts, young and old alike. 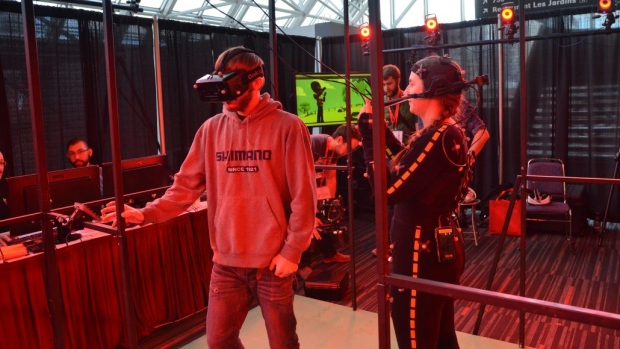 Connoisseurs will be greeted by the kiosks of industry giants, such as Ubisoft (Education, Rainbow 6 Siege, For Honor, Assassin's Creed Odyssey), EA (EA Sports Series, The Sims, Plants vs. Zombies), Ludia (Jurassic World Live, What's Your Story, Dragons: Rise of Berk), Gearbox (Borderlands 3) and Red Barrels (Outlast & Outlast II). There are also independent studios among the exhibitors, including Quebec's most popular such as Thunder Lotus (Spiritfarer), Panache (Ancestors: The Humankind Odyssey), and Outerminds.

On Monday and Tuesday, it will be the professionals' turn to make an appointment in multiple conferences on the workings of the industry.