McGill study group digs for Anishinaabe language roots, one week at a time

McGill study group digs for Anishinaabe language roots, one week at a time

Each Wednesday, more than a dozen students meet in a McGill University study room to learn and practice Anishinaabe, a language heard on the Island of Montreal long before French or English.

The student-led sessions formed after a discussion between Anishinaabe student Jenny Makahnouk and Dr. Nathan Ince of the university's history, classical and Indigenous studies departments.

"I took a course with Nathan last semester, and we're both just really interested in the Anishinaabe language," said Makahnouk, a third-year student at McGill. Her family is from Seul Lac First Nation in Northern Ontario. "We just kind of got together, and we're like, 'We like Anishinaabe. Let's try this out.'"

What started as a very small group grew to include between 14 and 20 students who show up weekly to practice and build their language skills.

"The language is brilliant," said Ince. "The way it expresses things is so different than any other language that I've encountered."

He loves deconstructing and learning how to arrange words.

"It is a pleasure to sort of unravel these little riddles and realize that what you thought was there when you're reading the sentence is actually something completely different."

The students, Ince said, are excited to learn the language.

"There's a real sort of fun element to it," he said. "To use the language of the kids, you have your minds blown frequently over how humans can communicate with each other. It's it's incredible. There's an excitement." 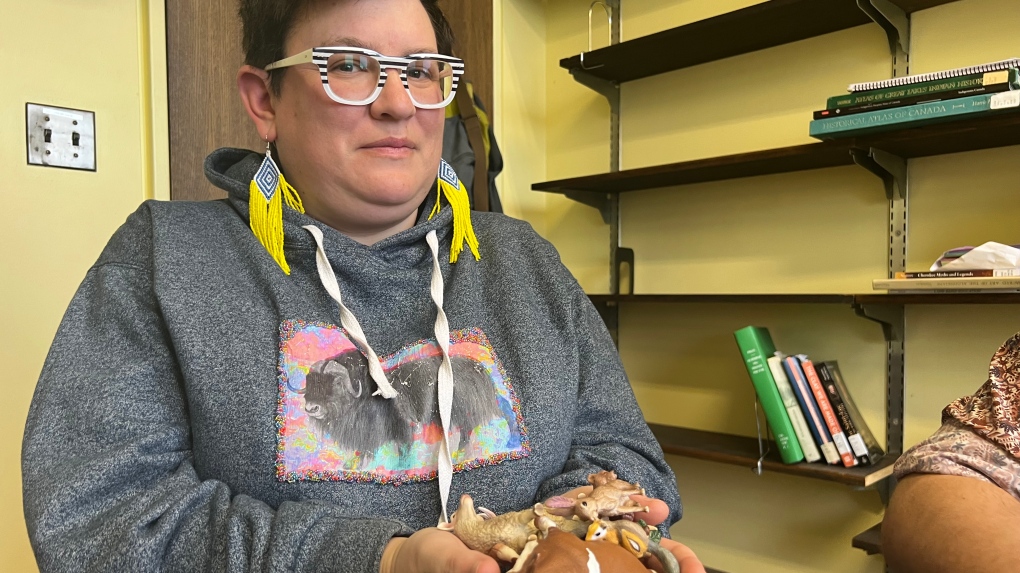 Jenni Makahnouk is part of a group of McGill University students learning the Anishinaabe words for animals, places, and anything they can as they build language skills from the grassroots up. (Daniel J. Rowe/CTV News)

"It's quite hard to find fluent first-language speakers of Anishinaabe," said Makahnouk.

She grew up in Edmonton but visited her community often. Like many people her age, she found that the destructive Canadian residential school policy caused a break between her grandmother's generation and her parents, who were forced to speak English.

"My grandmother still speaks quite fluently, but none of her children speak, and none of her grandchildren speak," she said. "I'm trying to learn it, and I'd like to pass it on as much as I can, but it's really difficult to do that."

Despite the challenges, language revitalization projects range from the small study group at McGill to the two-year Kanien'kéha (Mohawk) adult immersion program in Kahnawake.

Those with a passion and interest in Indigenous languages survival continue to work for their inclusion in the language debate.

"I wish that there was as much passion for French and English protections as there could be for Indigenous protections," said Makahnouk. "It's really hard for us to learn (Anishinaabe), and there doesn't seem to be a lot of like status with our languages, and yet, we were the first languages of the land."

Work continues to develop an Anishinaabe course at McGill for full credit, but finding an instructor and building a course curriculum remain challenges.

Students like those in the study group would like to see Anishaanabe alongside other languages on a course catalogue.