MONTREAL -- As the COVID-19 pandemic exacerbates tensions within some families, the Ordre des travailleurs sociaux et des thérapeutes conjugaux et familiaux is asking the Quebec government for access to marital and family therapy in the public health and social services network.

Some of the 288 marriage and family therapists (TCFs) currently work in the public network, but they are only a minority.

The majority of therapists work in private clinics, such as Julie J. Brousseau, who founded her own clinic in the Outaouais.

"It's about time we had a free service in the network for couples and families," she said.

In an interview with The Canadian Press, the therapist explained that the cost of consultations in clinics like hers is sometimes a barrier for families, especially for the poorest.

"There aren't many alternatives for them," she said.

When a family seeks help with child or adolescent behavioural problems, parent-child relationship difficulties or marital problems, they may consult professionals in the public system, called "relationship workers", but there is no guarantee that these workers are marriage and family therapists.

"They may be referred to someone who is not a TCF, unfortunately," says Brousseau.

Mylene Choquette is a therapist in a private clinic in Bromont and also wants families to have access to marriage and family therapy in the public system.

"Currently, the public system is much more structured for individual follow-up. We are specifically trained to intervene with more than two people, in other words with couples or families, but this is not necessarily a widespread method in psychotherapy and mental health," said Choquette. "Sometimes it's relevant to do individual therapy processes, but sometimes it's really more effective to take the members of a family together." 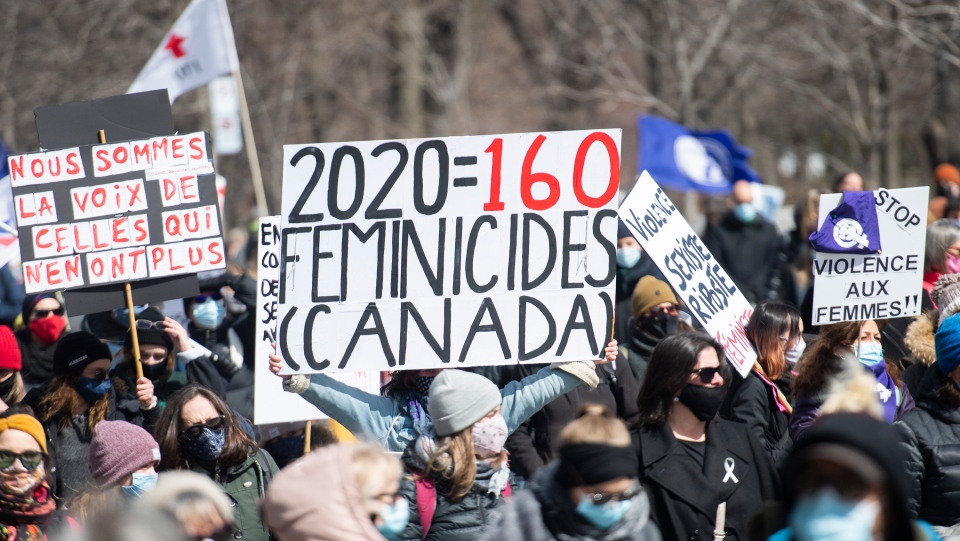 People take part in a demonstration to highlight violence against women in Montreal, Friday, April 2, 2021. THE CANADIAN PRESS/Graham Hughes

Pierre-Paul Malenfant is president of the Ordre des travailleurs sociaux et des thérapeutes conjugaux et familiaux and would like to see TCFs accompany couples and families on the front line, "especially through the CLSCs' proximity counters, as recommended in the Laurent Commission report in order to prevent cases of conjugal violence," he said.

Brousseau agrees and believes that tragedies, such as the recent feminicides, could be avoided if access to therapists was simpler and integrated into the public health network.

"I am convinced of this," she said. "Tragedies could be avoided if we can access help. If you are accompanied, you can avoid trauma. It remains to be seen whether people will go for help, but when you get into the health network, there is a whole spiral that takes place and there is much more identification of couples and families, so I think it would be a real asset to be part of it."

The pandemic has also exacerbated relationship difficulties within families, according to Brousseau and Choquette, who noted that waiting lists for consultation have exploded since the beginning of the health crisis.

According to the organization, two conditions must be met for TCFs to fully exercise their role with couples and families in need.

First, their title must be recognized within the health and social services network, rather than being categorized as "human relations agents", a classification that groups together several professions.

The organization is also calling for new university programs to ensure the growth of the profession.

"The cohorts trained at McGill University, which offers the only master's program in marital and family therapy in Quebec, are only making up for the retirements," said Malenfant.

According to him, recognizing the TCF designation within the health care system will generate internship environments for students and allow for "new university programs in marriage and family therapy to be created", thus increasing the number of therapists in the province.

"With recognition of the job title, we could increase the pool of professionals and ensure a better regional distribution of their expertise," says Malenfant.

As part of Marriage and Family Therapists Week, which begins Monday, the Order is launching an advertising campaign on social media to invite the public to learn about the work of its members.