Manziel eager to start for Alouettes, but has 'tempered' expectations 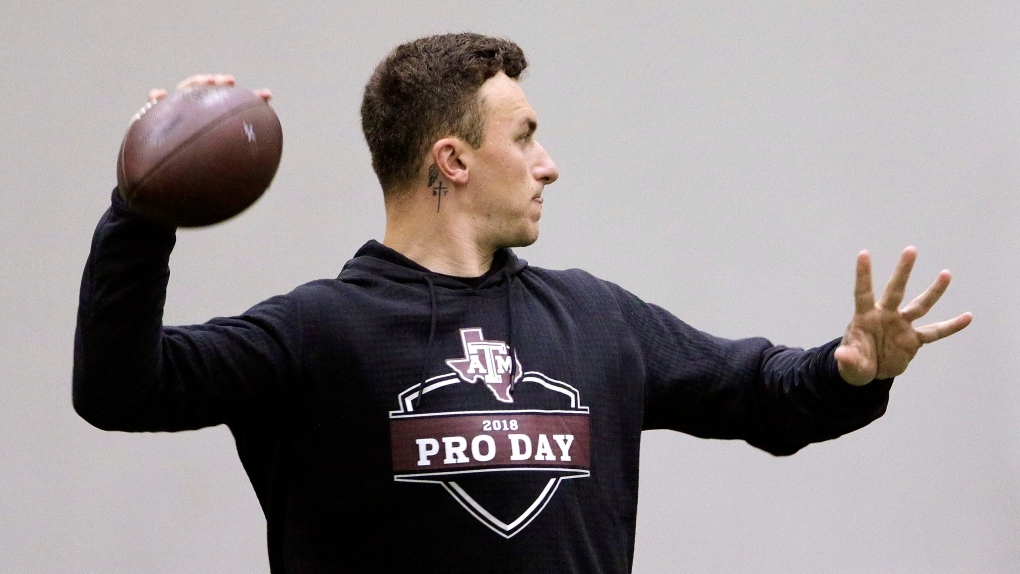 Johnny Manziel is eager to get into a CFL game, but he will let coach Mike Sherman decide when he will make his first start for the Montreal Alouettes.

The 25-year-old quarterback, who is trying to resurrect a promising career, went through his first practice as an Alouette on Monday, a day after the 2012 Heisman Trophy winner was traded to Montreal in a five-player deal from the Hamilton Tiger-Cats.

It did not appear that Manziel will start against the visiting Edmonton Eskimos on Thursday night, as Matt Shiltz took most of the first-team snaps.

But management made it clear he was not brought in to stand on the sidelines as he did while backing up Jeremiah Masoli in Hamilton's first five games of the regular season.

"I felt in practice today I improved and learned a lot," said Manziel. "As for my timetable moving forward, I trust (coach Mike Sherman and general manager Kavis Reed) to put me in a situation to succeed.

"When they're ready, they'll give me a chance. Until then, I'll come in and work like I need to work to catch up at a rapid pace. I've tempered my expectations a bit. I've been away from the game a bit. I know it will be a process."

After going 3-15 in 2017, the Alouettes are off to a 1-4 start while scoring only 69 points and had seen quarterbacks Drew Willy and Jeff Mathews both suffer injuries.

Reed does not see Manziel as a "saviour," but clearly he has gone all-in with his bid not only to turn around the season, but to end the run of failure that has seen 13 quarterbacks start at least one game for the Alouettes since CFL all-time passing leader Anthony Calvillo retired after the 2013 campaign.

"We understand the price we paid for this exchange and we feel very comfortable with it," said Reed. "We do not feel the price tag was too high."

Acquiring a high-profile quarterback, even one whose NFL career was derailed by off-field misbehaviour, should also give a boost to the Alouettes sagging ticket sales.

On Monday, Reed also picked up 11-year veteran slotback Adarius Bowman from the Winnipeg Blue Bombers for a conditional eighth-round draft pick. The three-time CFL all-star is coming off an injury last season with Edmonton and had only nine catches for 95 yards for the Bombers.

Manziel said he was grateful to the Ticats for giving him a chance to come to the CFL, but now is looking forward to showing what he can do.

"In no way did I ask to leave," said Manziel. "I felt I was treated as a brother on that team and I appreciate that because there's been a lot of things said about me out there, and to put that aside and just think about football was all I'd been dreaming about in two years away from the game.

"Hopefully, when I get to chance to play here I'll play at a level that a quarterback is expected to play in this offence."

In Montreal, he was reunited with Sherman, who recruited him out of high school for Texas A&M University. Sherman recalled a teenager who could do everything on a football field, which is what earned him the since-trademarked nickname Johnny Football.

But after being drafted 22nd overall in 2014 by Cleveland, things didn't go as planned. Manziel had off-field issues, incuding treatment for alcohol abuse. There was also a charge of assault involving his girlfriend that was dismissed. He later sought treatment for bipolar disorder. He was released after the 2015 season.

Now, he wants to put that behind him and rebuild his career.

"I, as everybody, have made a multitude of mistakes in my life," he said. "There was a point in time where I went down a path I never imagined going down.

"I still wake up with nightmares and bad thoughts about my past. I'm not proud of it and I'll never be able to change it. I still struggle today with past decisions and transgressions. But I do not truly believe that's who I am as a person. That's not who my parents raised me to be. It's not who coach Sherman met when I was coming out of high school at 16 or 17 years old.

"I made some mistakes. What I'm trying to do moving forward is to take care of myself as a person and treat the people around me with respect."