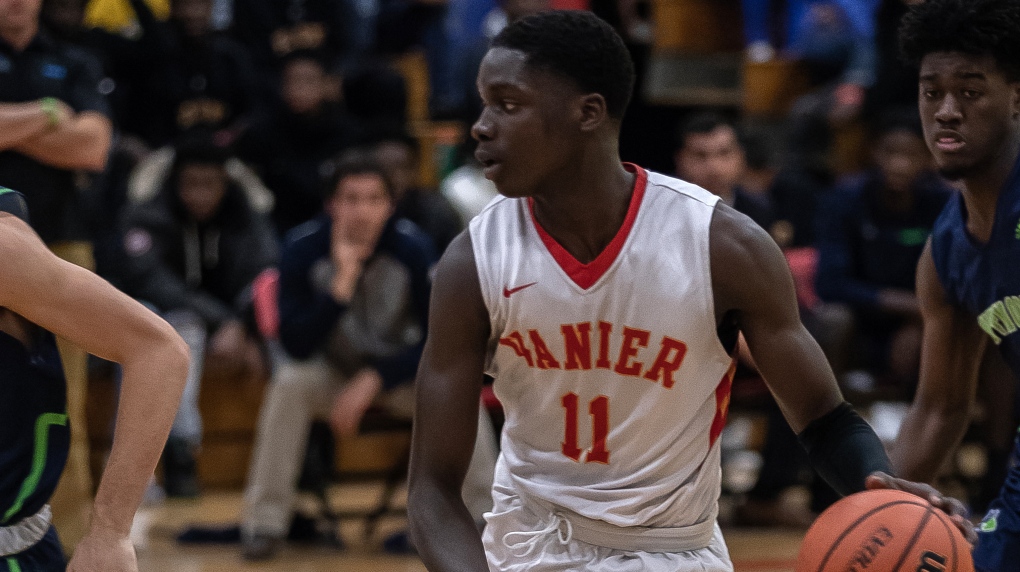 MONTREAL -- Karim Mane hopes the advice he's learned from NBA players past and present will serve him well in the future, as unclear as it may be due to the novel coronavirus.

The product of CEGEP Vanier College in Montreal recently announced he had signed an agent and that he'd remain in this year's NBA Draft, bypassing interest from a number of NCAA Division I universities.

The six-foot-five guard has had individual and team success at the collegiate level with Vanier College, and has represented Canada at the U19 FIBA world championships. ESPN rated Mane as a five-star recruit prior to him declaring for the draft, as well as a top-100 prospect.

All the more impressive when you consider that Mane only took up the sport eight years ago during his final year of elementary school, and didn't take it seriously until he was 16.

"I was really into soccer growing up in Senegal," said Mane, who moved to Montreal when he was seven years old. "That's all I did. Basically, I wanted to be a professional soccer player."

Mane says he's been in contact with a few NBA players as he seeks guidance for his prospective pro journey.

"The main thing, especially coming from Luguentz, was just coming in with a dog mentality," Mane said. "He came in and he proved himself when he was in the league and he just put Montreal on the map."

Dort, who signed with the Thunder as an undrafted free agent in 2019, said he told Mane to take advantage of any opportunity he gets.

Alexander-Walker said he reached out to Mane on a couple of occasions, passing on nuggets of wisdom he's learned as a first-year pro such as maintaining a daily routine.

Around 20 NBA teams reached out or interviewed Mane prior to the youngster's decision to declare for the draft. But according to his Vanier College head coach Andy Hertzog, none of them have been able to visit the player due to COVID-19 restrictions.

The NBA has yet to reschedule its draft combine, which was postponed earlier this year. It would allow teams to get a first-hand look at prospects like Mane are not as highly touted or well-known.

TSN basketball analyst Jack Armstrong said simply looking at highlights is not sufficient for properly assessing a player. It doesn't allow teams to see how they act when they're not contributing positively on the floor.

"You just try to make sure you don't fall head over heels without making sure you look at some of the other areas," Armstrong said.

Dort considered declaring for the NBA before enrolling at Arizona State University for their 2018-19 season, but changed his mind after he felt he didn't show enough of his game to scouts.

But Dort said he told Mane that their situations are much different.

"He played for Team Canada," Dort said. "A lot of people saw him. A lot of people would talk about him. And, personally, I feel like this draft coming up is not one of the best. I feel like he has a pretty good chance (of being drafted)."

Despite coronavirus concerns, Mane says it didn't affect his decision to remain in the upcoming draft.

"Anything that happens after that, we'll just have to find a way to manage." Mane said.

Canadian guard Karim Mane has elected to sign with an agent and keep his name in the 2020 NBA draft, he told ESPN. News story: https://t.co/J6ssRNlZT6

If selected this fall, Mane would become the first Quebec-born player taken in the NBA Draft who didn't play ball in the United States.

Alexander-Walker thinks the potential achievement could be huge for the country.

"It allows him to prove for other kids that are going to come after him that you can stay home, you can be in Canada and still have a chance at the NBA," Alexander-Walker said.

Mane said he's more preoccupied with getting on a roster than making Canadian basketball history.

"I haven't done anything yet. I'm still not there," Mane said. "And once I get there, my goal is not just to get there and just claim that I'm there."