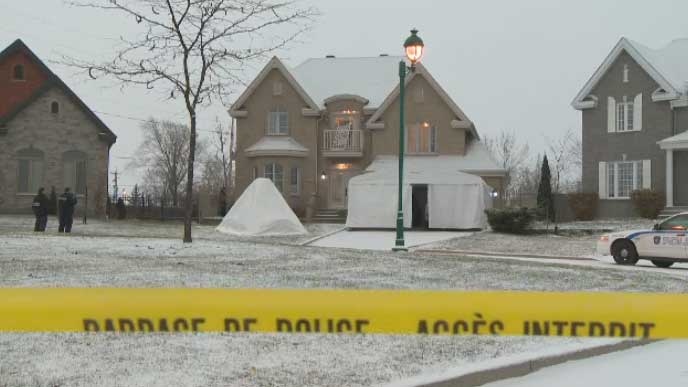 The scene outside a home invasion early Monday morning in Chateauguay.

MONTREAL—Two masked men entered a Beauharnois home just before 1 a.m. on Monday, yelling “police” as they broke down the back door. An hour later, a homeowner was brought out in a stretcher, shot twice.

A 911 call came through to the Chateauguay Police at 1:52 a.m on Monday from a woman calling for help saying her partner had been shot. Two men in masks and dark clothing broke into her home on Des Patriotes St. She and her partner were then tied up.

The 49-year-old man got free and an altercation followed where he was shot in the stomach and leg.

The suspects fled, although Chateauguay police spokeswoman Guylaine Brisson couldn’t confirm whether they were on foot or left by car. The Surete du Quebec's canine unit was deployed to the area around the house on Monday morning to help track the suspects.

The man was in critical condition at a Chateauguay hospital where he was stabilized and transferred to a Montreal condition. He is in serious condition and expected to recover. The woman was brought to hospital for shock.