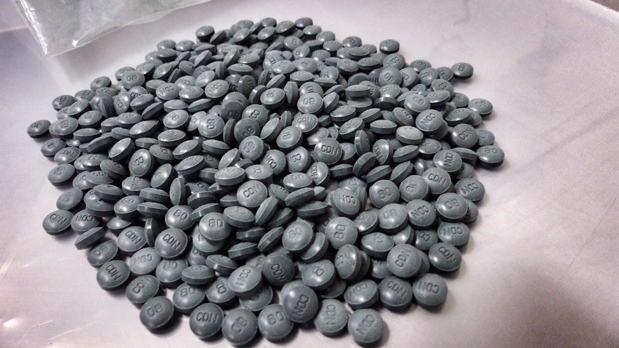 Fentanyl pills are shown in an undated police handout photo. (THE CANADIAN PRESS/HO)

A Colombian national accused of managing an international fentanyl trafficking operation from a prison cell in Quebec pleaded guilty to multiple charges in a U.S. courtroom on Friday.

Daniel Vivas Ceron, 38, entered the plea in North Dakota, the state that formed the epicentre of a sweeping international probe following the overdose death of an 18-year-old man.

"From a Canadian jail cell, Daniel Vivas Ceron directed a deadly drug ring that fuelled the opioid epidemic and took the lives of four Americans," Assistant Attorney General Brian Benczkowski said in a statement from the U.S. Department of Justice.

"Today's guilty plea brings some measure of justice for the victims and families that fell prey to Vivas Ceron's dangerous organization and its tragic track record of spreading addiction and abuse."

The statement, which outlined details from Friday's court proceedings, said Vivas Ceron admitted to being the ringleader of an operation that saw drugs distributed in Canada and the United States.

He told court that Chinese sources shipped hundreds of kilograms of drugs to Canada and the U.S. between 2013 and 2017, the statement said, adding he and other associates would then distribute them to customers.

The statement said Vivas Ceron relied on aliases, encrypted online accounts and a variety of email addresses to conduct his transactions, at least some of which were orchestrated from the medium-security Drummond Institution in Drummondville, Que.

Vivas Ceron was arrested in July 2015, the Justice Department statement said, noting he was extradicted to Panama and then the United States.

In addition to the four fatal overdoses authorities attribute to Vivas Ceron's operation, they say drugs sold by the trafficking ring also contributed to 11 instances in which someone suffered serious harm but did not die.

More than 30 people, including five Canadians and five Chinese nationals, are accused in the case of dealing large amounts of the powerful opioid in the U.S. and Canada.

Authorities have said Henke overdosed on fentanyl supplied by Brandon Hubbard, a Portland, Ore., man who obtained his drugs from Vivas Ceron. Hubbard was sentenced to life in prison.

The case drew the attention of former U.S. attorney general Jeff Sessions, who came to North Dakota in April to discuss the investigation after charges were laid against a prominent participant from China.

The Department of Justice named the RCMP as one of the international law enforcement partners in the investigation. The force did not immediately respond to request for comment on the case as a whole or Vivas Ceron's plea.