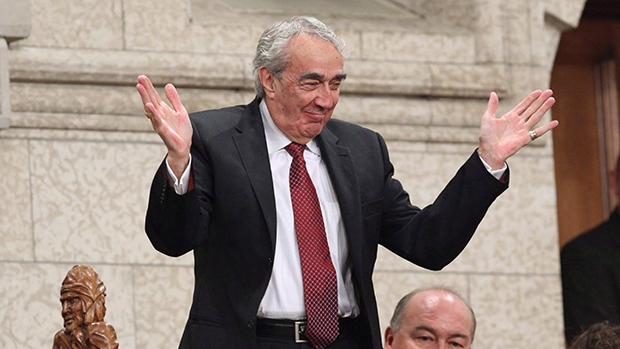 Senator Marcel Prud'homme, who is retiring, acknowledges applause in the visitor's gallery in the House of Commons in Ottawa, Thursday, Nov.26, 2009. THE CANADIAN PRESS/Fred Chartrand

OTTAWA -- Marcel Prud'homme, the straight-talking former senator and Quebec MP whose career in federal politics spanned 45 years, has died at the age of 82.

J. Greg Peters, the usher of the black rod of the Senate, confirmed the death in an email to Senators Wednesday.

The Montreal-born politician entered federal politics in 1964 when he was elected as a Liberal MP in the Montreal-area riding of Saint-Denis.

He was re-elected eight times before resigning to serve as an independent member of the Senate from 1993 until his retirement in 2009.

Over his years in government Prud'homme became known as a straight-talker and ardent defender of the Palestinian cause, which gained him both admiration and criticism from his peers.

In his farewell speech to the Senate in 2009, he referred to the crisis in the Middle East as "that cancer that has gnawed at the world for half century," and encouraged Canada to engage in dialogue with countries whose policies put them at odds with the government.

"I persevered, throughout my career, on the path of building bridges with people that some treated like the wretched of the earth, despite the gulfs between us," he said.

"It is not rare for yesterday's enemies to become today's allies."

When Prud'homme retired, former MP Yvon Godin described him as a staunch defender of the french language and the francophonie.

Prud'homme served as a parliamentary secretary on several occasions in the 1970s, including to the secretary of state of Canada and twice to the minister of regional economic expansion.

After being named to the Senate by former Conservative prime minister Brian Mulroney, he set up some 20 parliamentary associations, including with countries such as Russia, China and Libya, which were far from being Canada's traditional allies.

He had said he was proud to have exercised his freedom of speech as a parliamentarian despite his belief that it cost him the chance of being named to a cabinet post.

"But I think I easily accepted not being a minister, knowing I wanted to keep my freedom," he told The Canadian Press in 2009.

Prud'homme served under nine prime ministers and sat on a number of Senate and parliamentary committees.

He received awards and commendations from the governments of Russia and Cuba, as well as an honorary doctorate from an Algerian university in 2008.