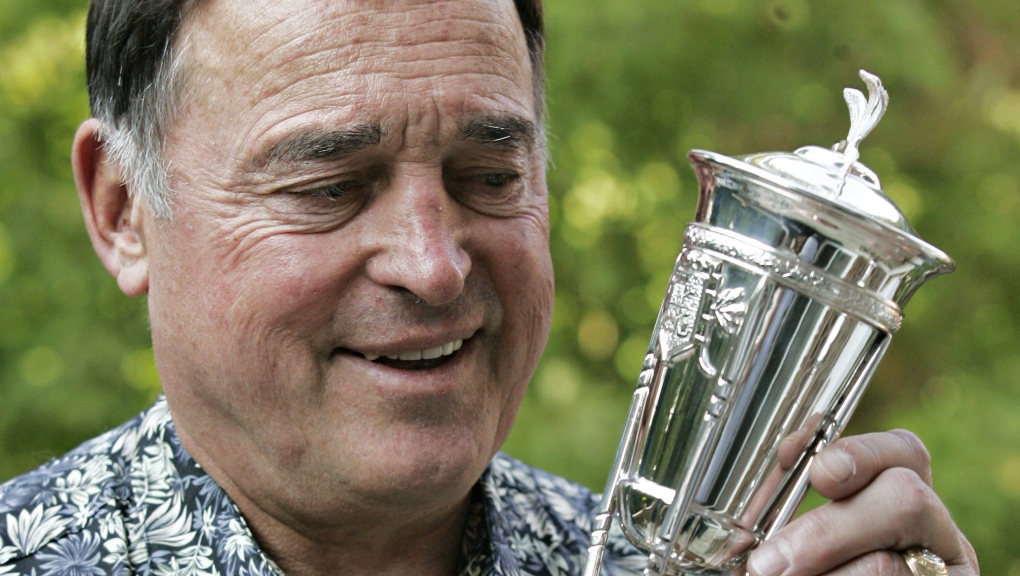 Frank Mahovlich looks at a replica of the Prince of Wales trophy in Toronto on Tuesday, Oct. 4, 2005. (CP PHOTO/Adrian Wyld)

And really, who can blame him?

The Hall of Famer won four Stanley Cups with the Toronto Maple Leafs -- including the franchise's last title in 1967 -- and two more as a member of the Montreal Canadiens in the early 1970s.

So when the Original Six rivals open their first playoff meeting in 42 years later this week, Mahovlich will simply be an interested observer.

"I won't be cheering for either one of them," the 83-year-old said with a laugh during a recent phone interview with The Canadian Press. "I don't want to make anybody upset. They're both great teams and they treated me so well."

The Leafs and Canadiens used to meet regularly in the playoffs, tussling eight times between 1951 and 1967 before the NHL started to expand.

"It was electric," Mahovlich recalled of the atmosphere inside the Montreal Forum or Maple Leaf Gardens. "You stepped on the ice and people were cheering like crazy ... and nothing's happened yet."

"There has always been a competitive nature between Toronto and Montreal," said Brian Conacher, a member of the '67 Leafs. "There's always been this competitive spirit both on and off the ice.

The final in 1967 -- Toronto's last playoff victory over Montreal came on May 2 of that year -- was important for a number of reasons beyond the game.

"It was the last playoff series of the Original Six, it was Toronto against Montreal, and it was Canada's centennial," Conacher added. "It was also Expo 67 in Montreal, where the expectation was that the Canadiens would be showing off the Stanley Cup in the Quebec pavilion."

Darryl Sittler entered the league with Toronto in 1970, and it didn't take long for him to grasp the importance of Leafs-Canadiens through his veteran teammates.

"I got a real pulse and feel for the tradition, the rivalry and the respect the organizations had for each other," he said. "The Habs were my favourite team growing up as a kid. Jean Beliveau was my idol."

But there would be just two more post-season matchups post-1967, with Montreal's powerhouses of the 1970s sweeping Toronto four straight in both 1978 and 1979 on the way to winning the Canadiens' fifth and sixth Cups of the decade.

"It's historic," said Scotty Bowman, who won five titles as Montreal's head coach. "We had a good rivalry."

"Everyone sees that we won four straight games and we had nine Hall of Famers," said former Canadiens defenceman Larry Robinson. "But as anyone who's played knows, no game is easy.

"The games were a lot closer."

The fourth and final encounter at the Gardens in 1979 ended controversially when Leafs forward Tiger Williams took a penalty for high-sticking on Robinson in overtime. The blue-liner blasted home the winner on the ensuing power play, but along with some of Toronto's players, had to restrain an irate Williams from going after the referee.

"Tiger is a great person and wore his emotions on his sleeve," Robinson recalled. "Was it a penalty? Was it not a penalty? Who knows? The fact that your team loses because you take a penalty and it's in overtime and there's not many penalties called in overtime, it was a unique situation.

"Nobody wanted to win more than Tiger ... we were able to save him (a suspension)."

Lanny McDonald credited Robinson for putting his own celebration aside to do the right thing, even in the heat of the moment.

"Good for Larry," said the former Toronto winger. "That's the kind of guy he is. A true sportsman ... it could have been a whole lot worse."

Part of the reason the Leafs and Canadiens, who open their pandemic North Division playoff series Thursday at Scotiabank Arena, haven't met in the post-season for more than four decades is because they resided in different conferences for much of the 1980s and 1990s.

The teams got close to a dream matchup in the 1993 final, but Wayne Gretzky's Los Angeles Kings eliminated Toronto in Game 7 of the conference final before falling to Montreal -- Canada's last Cup win.

"Everyone was looking forward to the Leafs and Habs playing," said Sittler, who was part of Toronto's management at the time. "That would have been special. It's nice that this is happening.

"Who knows if it's going to happen again for 42 years?"

Speaking of long droughts, the Leafs haven't won the Cup since trading Mahovlich to the Detroit Red Wings in 1968. A family legend goes that his older sister, Anne, put a curse on Toronto that seems to have stuck.

"She hasn't taken it off," joked Mahovlich, who was subsequently dealt to Montreal in 1971. "I don't know what's going to happen.

Regardless of what does happen, a matchup generations in the making is finally here.

Fans, while not allowed in either arena because of COVID-19 restrictions, are bubbling with excitement.

The same goes for some of the game's greats. But unlike Mahovlich, most won't have difficulty choosing sides.

"My heart his still with the Montreal Canadiens," Robinson said.

"This is long overdue," McDonald added. "I'll be glued to the television set.