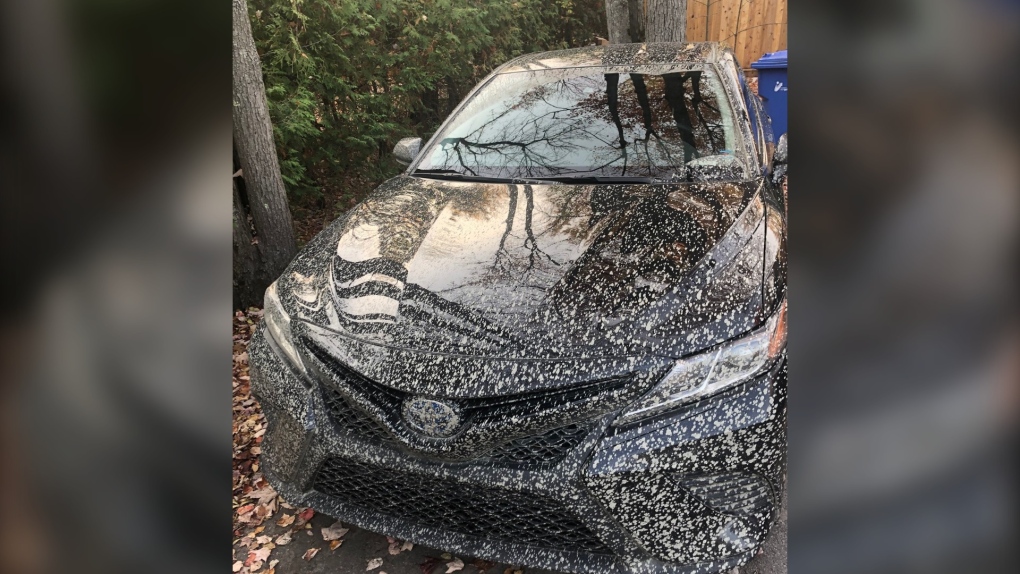 MONTREAL - A commuter whose new car was showered in concrete residue while driving under a construction site on Highway 40 may file a complaint with Transports Quebec.

On Monday, J Laroche was driving home from work and spotted a stream of water falling onto the highway ahead of him.

It wasn't an unusual sight, he told CJAD 800's Aaron Rand on Wednesday. The REM is being built nearby, and the overpass over the Highway 13 is under construction--workers frequently toil above the road.

He drove into the stream of liquid.

"I proceed in the right lane, and what do you know? It's not water; it's cement," he said. "Liquid cement."

The stream of material hit a couple of cars, impeding their vision.

"People slammed on their brakes," Laroche said. "I got hit. People behind me got hit. It's fortunate that there was no accident because when this stuff hits your window you can't clear it away quick enough."

Laroche sprayed his windshield with wiper fluid, but the grey haze lingered. Pebbles and rocks obscured his vision, embedding themselves into the car's rims, edges and crevices.

"I flooded the window with the juice and tried to clear it as quick as possible; everyone slowed down," he said.

When he arrived home, the slurry had solidified.

He tried hosing down his car, and a vigorous brushing--but it didn't work. Next, he paid for a "supreme" car wash, and it helped, but grey streaks lingered in hard-to-reach areas. They're still there.

But George Iny, from the Automobile Protection Association, said claims against contractors are tedious to file and rarely successful. He said Transports Quebec would likely give Laroche the contact information for whatever contractor was working on the overpass the night his car was hit. Laroche would have to sue.

"You have very short delays to send your notice. It could be as little as 10 days and that's often how sloppy contractors get out of it, because they're shielded," he said. "Contractors don't pay. They wait until you sue them. I think they know most people give up."

A spokesperson for the REM told CTV news the incident had nothing to do with the construction of the REM, which is being built near Henri-Bourassa, not the Highway 13.