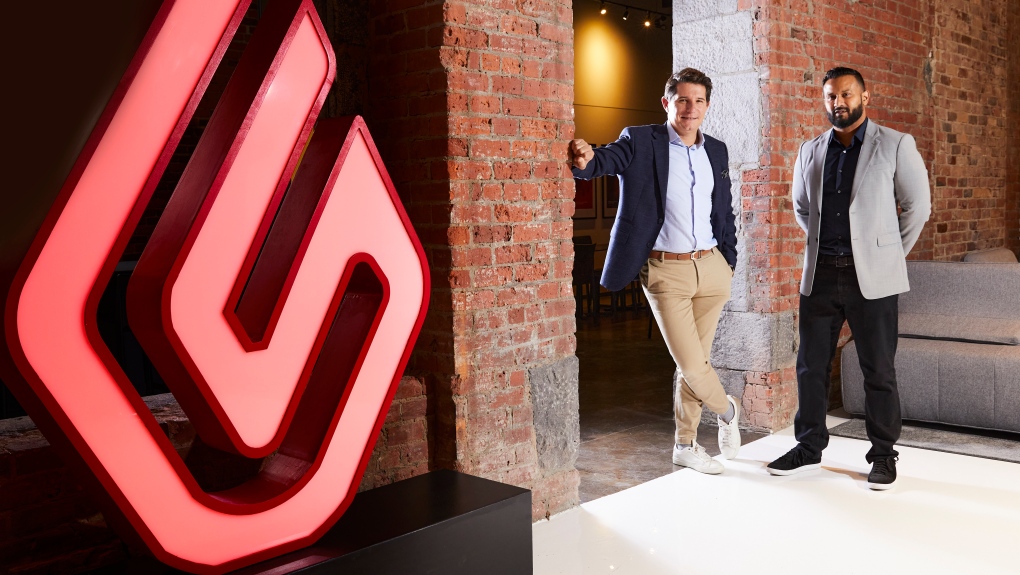 Lightspeed Commerce Inc.'s new chief executive JP Chauvet, left, and founder Dax Dasilva are seen in Montreal in an undated handout photo. Chauvet unveiled his plans for the Montreal tech company a day after Dasilva stepped down from the top job. THE CANADIAN PRESS/HO-Lightspeed,

Lightspeed Commerce Inc. reported a loss of US$114.5 million as the COVID-19 pandemic hampered its fourth quarter, but the company is optimistic that shifts in consumer spending habits that come with the health crisis easing will help it recover and even reach profitability.

The loss reported by the Montreal point-of-sale technology company on Thursday compared with a loss of US$42 million in the same quarter last year.

"It was a tale of two quarters in Q4. January and February saw the effects of Omicron disrupt our selling efforts and our customer volumes," said Brandon Nussey, the company's chief financial and operating officer, on a call with analysts.

"But as restrictions eased, we saw our best month ever in March in terms of new locations added and new business brought into the company. This gives us optimism as we look ahead to a post-pandemic world."

The quarter ended March 31 is typically the slowest for Lightspeed's clients because they process lower sales volumes after the previous busy holiday shopping season.

This time, the quarter also encompassed a period where Canada and many other countries were slowly starting to lift measures imposed to quell the spread of COVID-19.

Many of Lightspeed's restaurant, retailer and hospitality clients were thus allowed to welcome increasing numbers of customers back to their brick-and-mortar locations, necessitating point-of-sale technology.

Lightspeed is particularly exposed to the effects of the pandemic because most of its gross merchandise value — a metric measuring the value of products sold through its technology — is derived from physical retail, said JP Chauvet, Lightspeed's chief executive, on the same call as Nussey.

"Simply put...the pandemic was not our environment," he said.

But Chauvet is seeing the retail environment change in Lightspeed's favour.

Restaurants are fully-booked again, GMV is rebounding and online purchases are moving back to brick-and-mortar channels, Chauvet noticed.

There is also a slew of entrepreneurs toying with new concepts and restaurants after having to shut down businesses during the pandemic. Chauvet believes they will deliver new business.

"I don't know of any restaurants here who would use a legacy system," he said. "They'll go towards platforms like Lightspeed as they open their operations, so (I'm) feeling really good."

These trends have Lightspeed predicting that it will reach adjusted EBITDA break even by the end of March 2024 and achieve revenues between US$740 million and US$760 million in 2023. Revenue for the first quarter of its 2023 financial year is expected to be between US$165 million and US$170 million.

However, there are challenges ahead.

Within the durable goods category, people shifted away from purchasing bikes, sporting goods and home improvement products and toward spending money on fashion, apparel and hospitality.

Then, there are stock woes that have festered since Spruce Point Management accused Lightspeed of hiding massive inflation and misleading investors around its growth potential in September. That contributed to a steady plunge for Lightspeed's stock, which had hit a 52-day high of $165.87 in September but sat at $26.49 in mid-morning trading on Thursday.

Exacerbating the plunge is a fall in tech stocks that is being seen across the sector as much of the globe returns to pre-pandemic pastimes and thus, spends less time online, and a tight labour market, which has pushed companies to have to sweeten employee compensation and benefits packages.

"What's happened in the broader stock market and the downstream effect of that, Lightspeed certainly not been immune to that," said Nussey. "Having said that, we've been pretty pleased with our ability to attract and bring in new folks."

Revenue for the fourth quarter of its 2022 financial year totalled US$146.6 million, up from US$82.4 million a year ago.

The Conservative Party of Canada's leadership election organizing committee says it has disqualified candidate Patrick Brown from the race. Election committee chair Ian Brodie says in a statement the party became aware of 'serious allegations of wrongdoing' by Brown's campaign that appear to violate financing rules in the Canada Elections Act.

A northern heatwave is melting records in Yukon and Northwest Territories, where temperatures climbed above 30 C in the Arctic Circle.