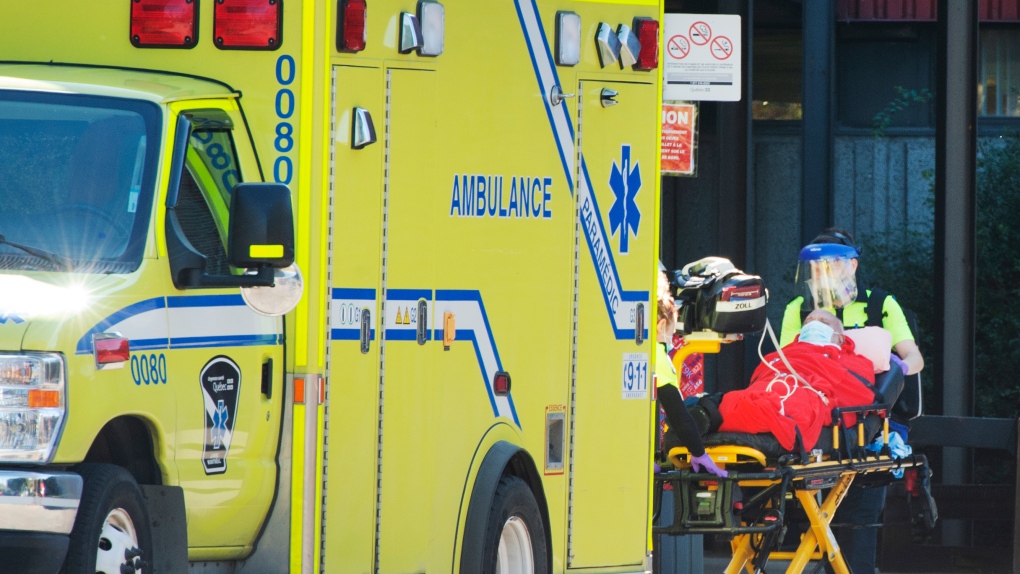 A resident is transported to an ambulance by first responders at the CHSLD Lasalle as new daily COVID-19 cases in Quebec remain over 1,000, Friday, October 9, 2020 in Montreal.THE CANADIAN PRESS/Ryan Remiorz

QUEBEC CITY -- Quebec must "roll out the red carpet" for the health network retirees who still have the fire burning to help fight the COVID-19 pandemic, says the Liberal Party of Quebec (PLQ).

These retirees, if in good health, could come and lend a hand, particularly in CHSLDs where the situation remains extremely fragile, the opposition party says.

The first credit would be equivalent to the employment income of the retiree returning to service, and the second would be offered to those wishing to do a minimum of 200 hours annually in CHSLDs.

"Despite your repeated calls to retirees from the health network, it is clear that the attraction is not there," said Sauve in her letter to the minister.

"The human resource deficit is widening," she added. "We must try to make the invitation to return to work more attractive."

If it wants to succeed in finding retired staff, the government must also, according to the PLQ, commit to:

The retiree returning to work should also be able to determine the number of hours he or she wishes to do, according to Sauve, who suggested targeting people who have left the network within one to five years.

The PLQ does not know precisely how many professional positions need to be filled in the establishments but calculates that attracting 6,000 retirees with these measures would cost the treasury $90 million.

In Laval alone - Sauve's riding - about 100 nurses and nursing assistants are missing.

"It's time we didn't just say, 'Come on, we need you,'" she said. "You have to do 1, 2, 3 more things to make it attractive despite the difficult context because if you don't put your effort into rolling out the red carpet, you're not making it attractive and enticing."

Sauve said that 61 CHSLDs have active COVID-19 cases, two of them with more than 25 per cent of their residents testing positive for the virus.

Eight CHSLDs have between 15 per cent and 25 per cent of their residents who are infected.

"We should not be happy with these figures," warns the member for Fabre, who is demanding an answer as soon as possible from minister Dube.