Letter from the language police has a Montreal restaurant owner irate

MONTREAL -- A Montreal restaurateur is irate after a Thursday afternoon visit from an Office quebecois de la langue francais (OQLF) inspector, all while restaurants in Montreal aren't even allowed to open to the public.

One of the owners of Kitchen 73 in Riviere-des-Prairies took to Facebook to share his frustrations after he was informed the sign outside his restaurant was in possible violation of the Charter of the French language, despite having already gone through the same issue with the Language office in the past.

"In full closure of the restaurant industry I get a visit from an arrogant OQLF Inspector, threatening me to fine me for my Anglo sign in which is trademarked and has over 80% of French writing," said the Facebook post. "I asked him if the fines stick when there’s only chairs and tables in the restaurant with no business. He laughed in my face."

Since 2016, Quebec has required that businesses with an English trademarked name on an outdoor sign add French descriptors, a word or slogan that identifies the establishment's products or service.

In the case of Kitchen73, just underneath the name of the restaurant are the words: déjeuner, dîner and traiteur.

If the OQLF determines the sign does not respect the Charter of the French language the restaurant could be forced to change it or face a fine. 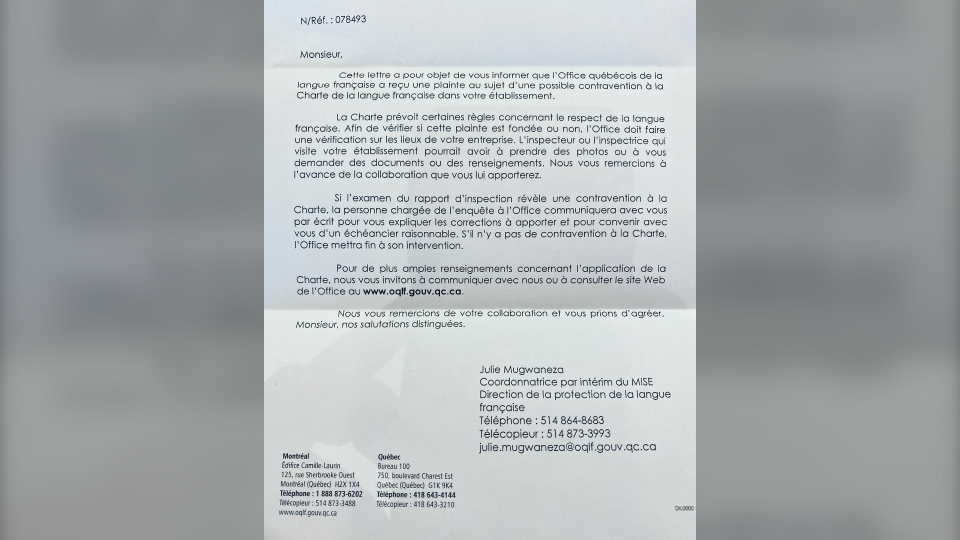