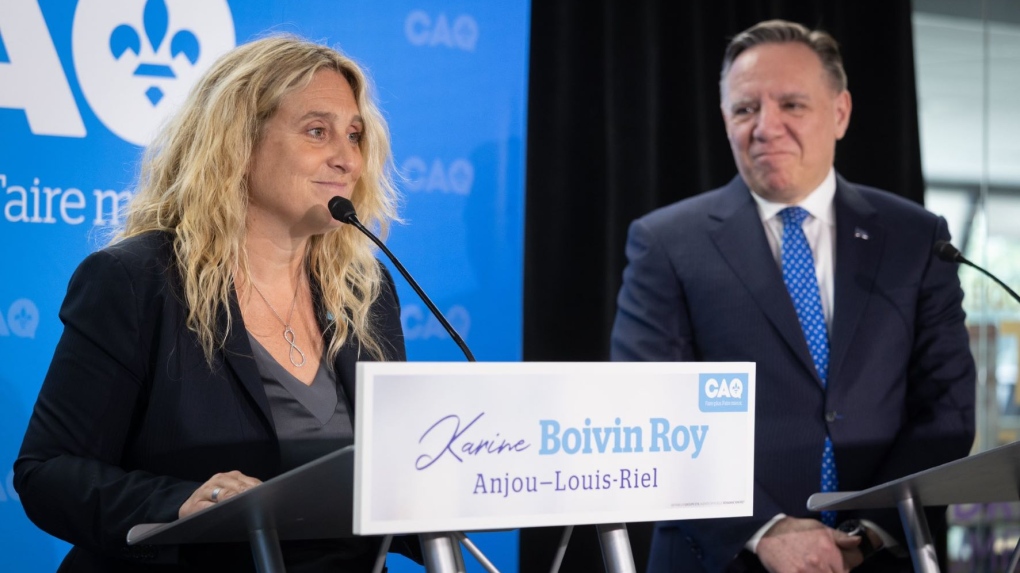 Premier Francois Legault announces Karine Boivin Roy as the CAQ candidate in the Anjou-Louis-Riel riding on Monday, June 13, 2022, ahead of the fall election. (Source: Twitter/@francoislegault)

Premier François Legault exuded confidence Monday as he introduced his candidate in the riding of Anjou-Louis-Riel, a riding he believes can be taken with the departure of former minister Lise Thériault.

Karine Boivin Roy, who was defeated at the mayor's office of Mercier-Hochelaga-Maisonneuve last November after having served as a city councillor with Denis Coderre's team for two terms, will carry the banner of the Coalition avenir Québec (CAQ) for the Oct. 3 elections.

The presence of a seasoned politician who is well established in the community shows that the CAQ intends to make every effort to take this seat from the Liberals.

Legault was in election mode for this announcement, going so far as to suggest that he, too, could very well announce tax cuts during the election campaign. When asked about this possibility in the face of skyrocketing inflation, the premier recalled the amounts he has already allocated and the fact that his government has already promised "another cheque in December to cover inflation."

Before expressing surprise that Liberal Leader Dominique Anglade had already announced "in a non-traditional way" election commitments four months before the election, he pointed out that he had never said he would not announce tax cuts and asked for "a little patience."

Legault insisted at length on the projects in the east of Montreal, including the REM de l'Est and the decontamination of land. He also addressed the issue of gun violence, saying he cannot tolerate it and promising to do more, if necessary.

-- This report by The Canadian Press was first published in French on June 13, 2022.