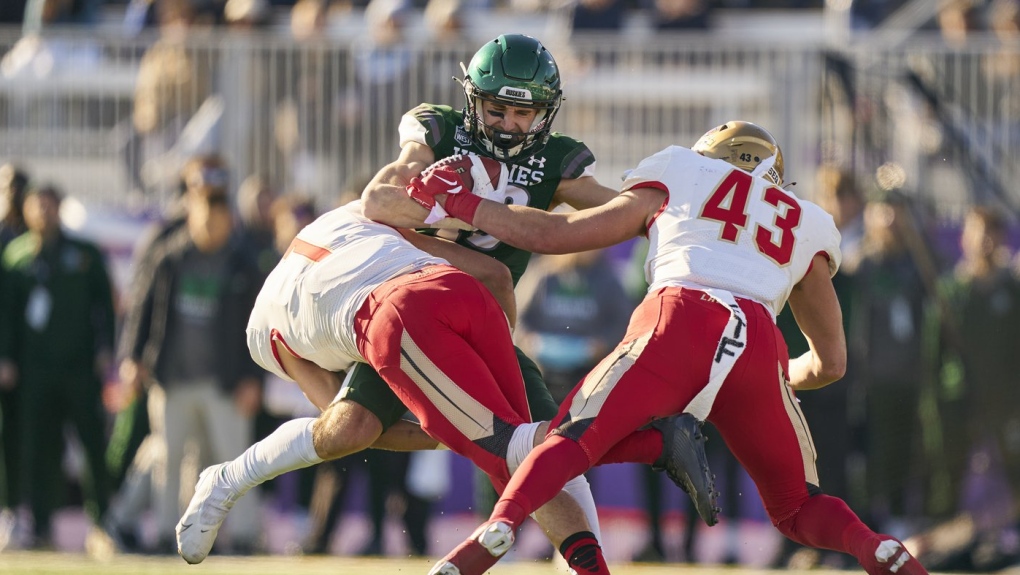 Jordin Rusnack of the Saskatchewan Huskies is tackled by Laval’s Francis Bouchard(1) and Charles Alexandre Jacques (43) during the U Sports Vanier Cup in London, Ont., Saturday, Nov. 26, 2022. THE CANADIAN PRESS/Geoff Robins

The Laval Rouge et Or won the Vanier Cup on Saturday with a 30-24 victory over the Saskatchewan Huskies at Western Alumni Stadium.

Daniel Wiebe caught a three-yard touchdown pass for Saskatchewan with 4:58 left in regulation to make it a three-point game.

Blanchard kicked a 25-yard field goal with 1:56 remaining to give Laval a six-point lead. The Huskies got the ball back deep in their own end but the Rouge et Or took over on downs and ran out the clock.

Everett Iverson and Rhett Vavra had the other touchdowns for Saskatchewan. David Solie had a field goal for the Huskies, who were looking for their first Vanier Cup win since 1998.

Laval improved its all-time record in the championship game to 11-2. It was the Rouge et Or's first title since 2018.

Saskatchewan running back Ryker Frank delivered the first big play of the game with a 44-yard run on the Huskies' second drive. Solie put Saskatchewan on the board at 6:33 with a 20-yard field goal.

Laval marched down the field but couldn't convert from the red zone, settling for a 15-yard chip shot by Blanchard.

With strong winds a factor at times on a sunny autumn afternoon, both quarterbacks leaned on the running game in the early going and kept the passing primarily to short routes.

Saskatchewan quarterback Mason Nyhus guided the Huskies on a seven-play, 75-yard drive that led to the game's first touchdown early in the second quarter.

Head coach Scott Flory decided to go for it on third-and-goal from the three-yard line and Nyhus found Iverson in the end zone at 13:45. Solie hit the convert to make it 10-3.

Kevin Mital, who won the Hec Crighton Award earlier in the week as the top player in university football, caught a 30-yard pass as Laval answered with a six-play, 76-yard drive capped by a three-yard TD run by Muganda on a direct snap.

Blanchard made the convert and added a rouge on the ensuing kickoff that gave Laval an 11-10 lead.

A 53-yard run up the middle by Saskatchewan running back Ted Kubongo put a charge into the pro-Huskies section of the north-end stands. Nyhus threw a three-yard TD pass to Vavra at 8:35, with a Solie conversion giving the Huskies a 17-11 advantage.

There were pockets of Laval fans sporting red gear in the south stands at the 8,000-seat stadium, which was about three-quarters full for the matinee.

Saskatchewan's defence delivered late in the third quarter as the Rouge et Or threatened at the six-yard line. A pass knockdown by Charlie Ringland was followed by a touchdown-saving tackle from Seth Hundeby.

Laval head coach Glen Constantin played it safe on third-and-goal from the three. Blanchard booted a 10-yard field goal at 3:25 that gave the Rouge et Or a 20-17 lead.

Mital was hobbled by an apparent leg injury but still managed to regularly flummox the Huskies' defence. He took a shovel pass for a 27-yard gain to Saskatchewan's 37-yard line on a play that ended the third quarter.

Desjardins nearly found Mital in the end zone on that drive but Katley Joseph was called for pass interference. Mital — who was named game MVP — then took a direct snap, faked a run and threw the ball over the pack to Dallaire.

Both teams earned road victories a week earlier to qualify for the 57th edition of the Vanier Cup. Laval beat the defending champion Western Mustangs and Saskatchewan topped the St. Francis Xavier X-Men.

Laval won both previous meetings against Saskatchewan in the title game, topping the Huskies in 2004 at Hamilton and again in 2006 at Saskatoon.

This report by The Canadian Press was first published Nov. 26, 2022.

A former Israeli prime minister who served briefly as a mediator at the start of Russia's war with Ukraine says he drew a promise from the Russian president not to kill his Ukrainian counterpart.

Justice Minister and Attorney General David Lametti says he is open to amending bail laws, which have come under increased scrutiny following the shooting death of an Ontario Provincial Police officer.

Republicans in some heavily conservative states won their campaigns for secretary of state last year after claiming they would make sweeping changes aimed at keeping fraud out of elections.