MONTREAL -- Long lines snaked through the Bill-Durnan Arena in Cote-des-Neiges Thursday morning as the province began offering AstraZeneca shots for those 55-years-old and up.

The lowered age limit -- 55 -- only applies to the AstraZeneca vaccine, not the other kinds. The others, made by Pfizer and Moderna, are still only available to older groups.

Several other walk-in sites have opened in the Montreal area:

A full list of sites offering AstraZeneca across the province is available here.

As of Friday, those 60 and up across most of Quebec will be able to book appointments for any kind of vaccine. 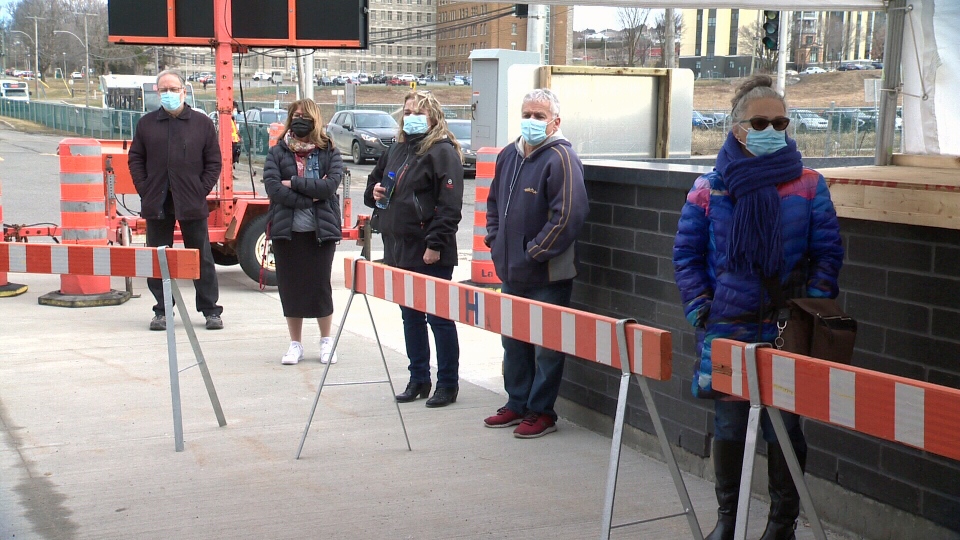 People line up outside the CERVO Brain Research Centre vaccination clinic in Quebec City on April 8, 2021, as the province lowers the minimum age to 55 for the AstraZeneca vaccine. (Samuel Pouliot, CTV News)

ASTRAZENECA STILL BANNED FOR CANADIANS UNDER 55

It remains unclear when the vaccine will be available to anyone younger than 55.

In March, the province paused the use of the vaccine for those under that age "as a precautionary measure," while Canadian researchers investigate a possible link between the vaccine and various blood clotting issues for that age group.

On Tuesday, a senior official at Europe's medicines regulator said there is a clear "association" between AstraZeneca's COVID-19 vaccine and very rare blood clots in the brain, though the direct cause of the clots is still unknown.

The European Medical Agency (EMA) said in a statement after the comments by Marco Cavaleri, chair of its vaccine evaluation team, that it was still conducting a review of the vaccine and expected to announce its findings soon.

"In my opinion, we can now say it, it is clear that there is an association (of the brain blood clots) with the vaccine. However, we still do not know what causes this reaction," Cavaleri said, without giving evidence to support his comments.

Still, the EMA has said the benefits of the AstraZeneca shot outweigh any risks, and the World Health Organization has backed the vaccine. AstraZeneca has said previously that its studies have found no higher risk of clots because of its vaccine.

-- With files from Reuters